INSIGHT: How one engineer has fractured the F1 paddock

INSIGHT: How one engineer has fractured the F1 paddock

Lots of things were different on the first Friday of the new Formula 1 season: session times, graphics and the Halo, to name but a few. But it was a different change that proved the catalyst for one of the more captivating periods of the day.

Away from the on-track action, a seemingly insignificant tweak was the move of the Friday FIA press conference – usually featuring team principals – from the end of the day to a slot between the two practice sessions.

After a remarkably similar FP1 compared to 2017 – Lewis Hamilton a little over 0.5s ahead of Valtteri Bottas, and a Red Bull less than 0.25s further back – the usual positivity that comes with a new season was suddenly replaced by the display of friction between team bosses.

And it is somewhat ironic that in the FIA press conference, it was an FIA employee – Laurent Mekies, who serves as safety director – who was at the center of the disagreement.

You may have seen the story here, but below is the transcript of Ferrari team boss Maurizio Arrivabene, Mercedes’ Toto Wolff and Red Bull’s Christian Horner failing to see eye-to-eye:

Q: Maurizio, before Melbourne we learned that Ferrari has hired Laurent Mekies [below] from the FIA, which didn’t seem to go very well with other teams. Do you understand their concerns, and to Toto and Christian, how did you react when you heard the news?

MA: “First of all, there is nothing wrong with that, because we were absolutely respecting the local law, the Swiss local law where Laurent was hired. And afterwards we went even further than that, because we gave him six months of gardening [leave]. Normally, what we discussed before the strategy group… we signed a confidentiality agreement, that means that we are not allowed to discuss or to share in public what we discussed there.

TW: “First of all, I didn’t see any gentlemen in the room when we discussed it. Second, for me the situation is completely different to Marcin [Budkowski, who moved from Renault to the FIA at the end of 2017]. Both intelligent engineers but Marcin was involved in issuing technical directives just a few weeks before he decided to join a team and had a lot of inside [information], and Laurent was involved in totally different activities that are not as sensitive, in my opinion, as with Marcin. He’s joining the team in seven or eight months from now, and for me it’s not a big deal.” 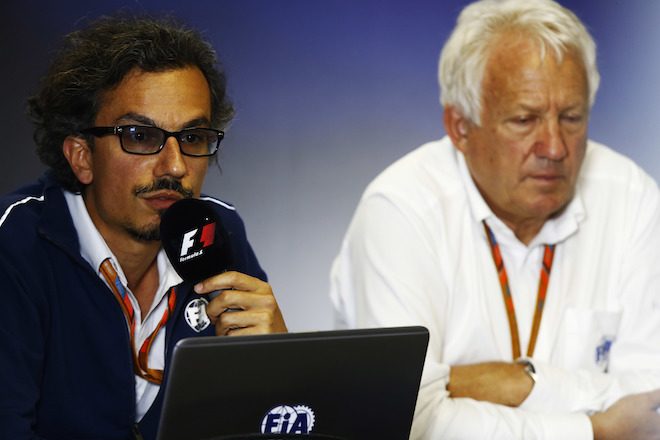 CH: “For me it is a big deal, because I think the disappointing element about this is that we have a thing called the strategy group where the FIA, FOM and all team principals attended, and we discussed the Marcin issue where there was great unrest about a key member of the FIA going to a team, in which case this was Renault. Renault diluted that by putting him on an extended gardening leave, but then ensued a conversation about [how] it’s unacceptable. Every team found it unacceptable.

“Of course you’re dealing with employment laws across different states, different countries and to try and police legally something like that… it was agreed in the room [that] all the lawyers in the world couldn’t come up with a contract that could police it. But there was an understanding and a clear statement by the teams to say ‘right, let’s have a clear position that there should be at least a period of 12 months in the garden for a member of a team going from either FOM, FIA to a team or a team going vice versa’. Certain teams were pushing for that period to be three years, but in the end it was agreed upon being 12 months.

“What’s disappointing is that that meeting was less than six weeks ago; arguably, discussions were probably happening at that time and it almost makes those meetings pointless if we can’t agree on something and action it. Of course you can hide behind ‘well it’s not in the regulations’, but as a group we agreed something, it hasn’t been adhered to and so one questions… what’s the point of having those meetings?” 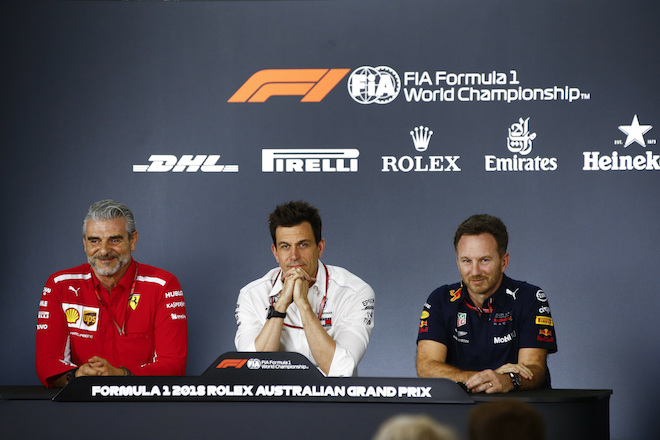 Now, I’ll admit to having limited knowledge of the various employment laws that could make it difficult to prevent such a situation arising, with teams on tricky legal ground when it comes to agreeing not to make certain hires. But Ferrari’s appointment of Mekies – and the various stances of other teams – betrays so much more than just their opinions on movement of personnel.

Arrivabene and Horner reference the strategy group, where six of the teams – Mercedes, Ferrari, Red Bull, McLaren, Williams and Force India – discuss issues relating to Formula 1’s future. The other four teams are all now involved as observers, and the group has often been seen as the starting point for changes. With F1 and the FIA also sitting on the group, if all agree on a topic then it is likely to make its way through the full governance process.

But the teams are being fractured by the elephant in the room that is Liberty Media’s plan for the sport beyond the end of the current bilateral agreements. With the teams needing to agree new commercial deals – ones that Liberty want to make more equal in terms of revenue distribution – the likes of Ferrari are unwilling to commit unless F1 is taking a direction it is happy with. And a direction it is happy with is a formula that allows it to win.

The latter is a sentiment shared by Mercedes, which is obviously keen to continue the sort of return on investment it has enjoyed over the past four years. With power unit regulations central to that, Ferrari has threatened to quit, Mercedes has told the sport to take that threat seriously, and in doing so, aligned itself with the Scuderia’s stance. Red Bull and McLaren, however, are much more in the pro-Liberty camp. Among other things, as non-power unit manufacturers, they both want to make the engine less of a differentiator between teams.

When it comes to the Mekies situation, Mercedes publicly sided with Ferrari on Friday. Red Bull stood opposed, and McLaren also complained that a gentleman’s agreement and been broken last week.

The positions represent so much more than Mekies. On a day when we were looking for the first answers as to how things will play out on-track this season, there was a clear indicator of where the off-track politics are heading.

Liberty has asked for negotiations to be kept out of the media – which may even have been mandated by the NDAs Arrivabene references – but seemingly more trivial topics look set to spill over as the standoff over future agreements plays out. It is going to become ever-more difficult for teams to agree on items such as aerodynamic tweaks and the hiring of employees when so many of the sport’s big players stand opposed on what constitutes a future F1 that they are happy to be part of.

Ultimately, the dispute over Ferrari’s handling of the Mekies situation is a microcosm for how the teams are positioned when it comes to the direction of the sport. And as the pressure cranks up regarding the latter, things are only going to become more and more fractious.

We might get a sporting battle between three teams on the track, but we could be poised to get a full-on Royal Rumble off it.