Billy Monger completed a British F3 test with Carlin on Tuesday, marking his first on-track appearance since losing both legs in a crash last year.

The 18-year-old drove the car, which had been specially modified to incorporate hand controls, at Oulton Park, marking a significant step toward his goal of returning to racing.

“Didn’t think this would be possible a few months ago,” he said via Twitter. “Long way to go but the goal is getting closer. Thanks @CarlinRacing for making this possible.”

Monger underwent a double leg amputation after running into the back of a stationary car during a British F4 race at Donington last April, but his positivity has inspired the motorsport world to rally behind his ambitions to return to competition, with support ranging from fundraising campaigns, to the direct involvement of the British racing governing body the MSA. With the MSA’s aid, he also recently helped overturn an FIA ruling preventing disabled athletes from participating in international single-seater competition. 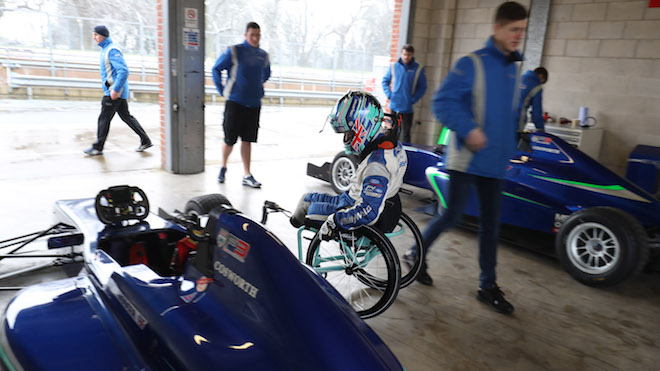