Filipe Albuquerque held the lead with Cadillac in the top four positions at the one-hour mark of the Rolex 24 At Daytona.

Starting third in Action Express Racing’s No.5 Mustang Sampling Cadillac DPi-V.R, Albuquerque closed to the rear wing of pole-sitter Renger van der Zande’s No.10 Konica Minolta Cadillac prior to the opening round of pit stops. The lead cycled to Albuquerque following the stops.

Tristan Vautier worked his way from fourth following the pit stops to run second at the hour mark in the No.90 Spirit of Daytona Cadillac, 5.880s behind the leader. Felipe Nasr was third in the No.31 Whelen Engineering Cadillac, followed by van der Zande. Fifth was the No.7 Acura ARX-05 driven by Helio Castroneves.

Fernando Alonso started the No.23 United Autosports Ligier JSP217 in 13th, and was 14th at the hour mark.

Ford GT driver Joey Hand took the GTLM lead from pole winner Jan Magnussen’s Corvette on the opening lap. Hand led at the hour mark, followed by the Corvettes of Magnussen and Oliver Gavin. Richard Westbrook led a lap in the No.67 Ford but pitted early in the cycle, complaining that the brakes were a bit touchy.

Jeffrey Schmidt held first in GTD in the No.29 Audi R8 LMS GT3. The class was in the midst of the opening round of pit stops after Miguel Molina led most of the hour in the No.82 Risi Competizione Ferrari 488 GT3. 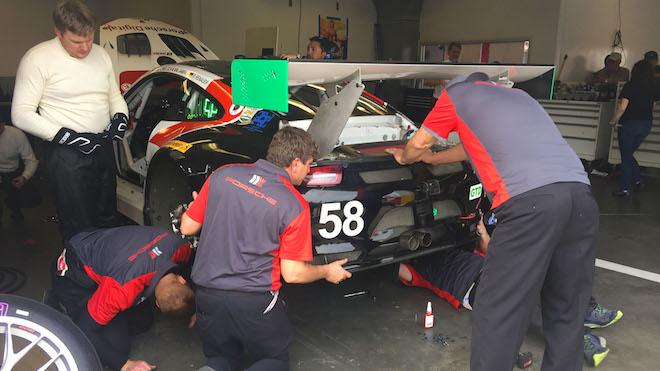 The hour ran incident-free, but that’s because there was an incident on the formation lap. Robert Renauer took the No.58 Wright Motorsports Porsche 911 GT3 R directly to the garage with significant damage, and it has yet to join the race.