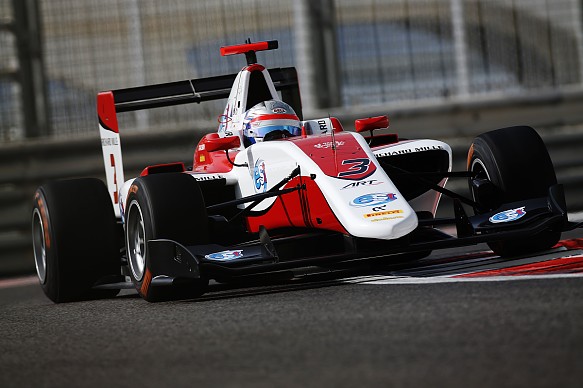 Alexander Albon gave his GP3 title chances a boost by claiming pole at the Abu Dhabi decider, with rival and ART teammate Charles Leclerc back in fifth.

The four points Albon scored for pole brought him to within 25 of Leclerc with 44 available from the weekend’s two races. It also ended Ferrari junior Antonio Fuoco’s championship hopes, as the Italian needed pole to keep his mathematical chance alive. Instead, Trident driver Fuoco proved off the pace throughout qualifying, only briefly breaking into the top 10 and ending up 11th.

Albon and Leclerc’s teammate Nyck de Vries had held provisional pole with a 1m55.991s after the first runs, but he was pushed back to fourth in the final shootout.

Jake Dennis was first to nip ahead, before Albon produced a 1m55.274s to beat the Arden driver by 0.24 seconds. Dennis’s teammate Jack Aitken then slotted in third.

As his main rivals pitted, Leclerc stayed out to try to squeeze more life out of his tires in a final pole bid. He started well with a new benchmark in the first sector, then fell away and failed to improve overall.

The American’s Hockenheim race-winning DAMS teammate Jake Hughes ended up down in 20th after an unusual incident when he was sent out of the pits with a blower device still attached to his car. A consequent unsafe release penalty means Hughes will have to start from the pitlane.