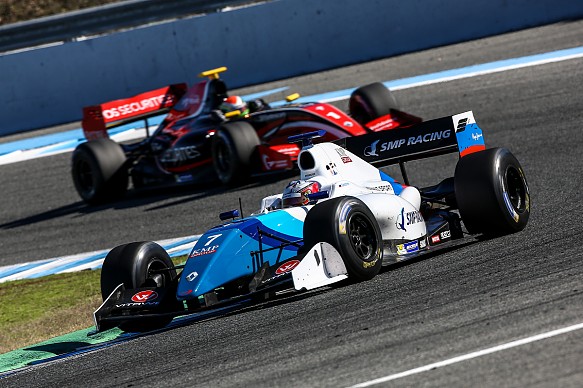 The Arden racer shot into contention thanks to a spectacular start, as he catapulted from fifth on the grid into the lead at Turn 1.

After soaking up pressure from polesitter Deletraz in the early laps, Orudzhev opted to take an earlier than planned mandatory pit stop on lap seven.

The Arden pit wall reacted to concerns that a safety car could be deployed, after its second driver Aurelien Panis retired in an awkward position on the grass verge on the pit straight.

Fortec provided tire service for Deletraz three laps later at the conclusion of lap 10 but, despite some quick lap times, rejoined the track 2.4 seconds in arrears of his Russian adversary.

In the closing stages, the lead pair demonstrated markedly superior pace over their rivals, lapping one second a lap quicker.

Renault Sport Academy driver Deletraz came within 1.5s of Orudhzev’s gearbox, but had to settle for second, two seconds back at the checkered flag.

Nevertheless, second moves Deletraz into the lead of the drivers’ standings at the expense of AVF’s Tom Dillmann – who could only finish eighth – ahead of the final round of the season at Barcelona next weekend.

Deletraz had a day earlier been demoted from fourth in the opening race for a collision with Dillmann, but with second moves a point clear of his rival with two races remaining.

SMP Racing’s Matthieu Vaxiviere was a distant third, comfortably clear of a close scrap between debutant Jack Aitken and Beitske Visser, who enjoyed her best run of the season for Teo Martin Motorsport.

Aitken held out to clinch fourth by less than a second, while race one winner Matevos Isaakyan formed the third car in the “Aitken Train” to complete the top six for SMP Racing.

After crashing in qualifying and starting from the last row, Rene Binder produced a strong performance to recover to seventh.

The Charouz-run Lotus racer was assisted by choosing a different pitstop strategy to his rivals, being the last runner to make his mandatory visit to the pits.

Long-time championship leader Dillmann salvaged eighth, having qualified 13th, but could not maintain his points advantage.

The Frenchman stated that he was considering using a new chassis for the Barcelona finale next weekend in a bid to address recent set-up difficulties.