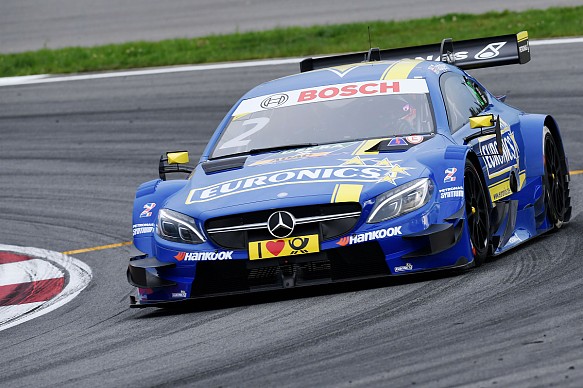 Gary Paffett claimed pole for the opening DTM race at Moscow Raceway in a damp but drying qualifying session in Russia.

Paffett had been fast throughout the 20-minute session, and while others opted to gamble and pit for dry tires, the ART Mercedes driver stuck with the wets and produced the fastest time with his final lap, beating Robert Wickens’ previous benchmark by 0.605 seconds.

The pole is Paffett’s first since the 2015 season finale at Hockenheim.

Behind the Briton, Wickens held on for second as Mercedes secured a 1-2-3-4 lockout. Wickens had snatched back top spot with his own final lap at the end of the session and, while he faced a nervous wait as the first of the contenders to complete his final run, he held on for second after Paffett’s improvement, with Paul di Resta less than a tenth back in third and Maximilian Gotz in fourth.

Mattias Ekstrom was the best-placed of the Audi contingent in fifth, a second off the pace, ahead of RBM’s Maxime Martin, who was the leading BMW. Timos Scheider and Glock recorded seventh and eighth for Audi and BMW, respectively.

Poleman Paffett’s ART teammate Felix Rosenqvist, making his first appearance in the DTM after being called up to replace Formula 1-bound Esteban Ocon, was ninth fastest in his first qualifying session in the series and will line up ahead of Jamie Green.