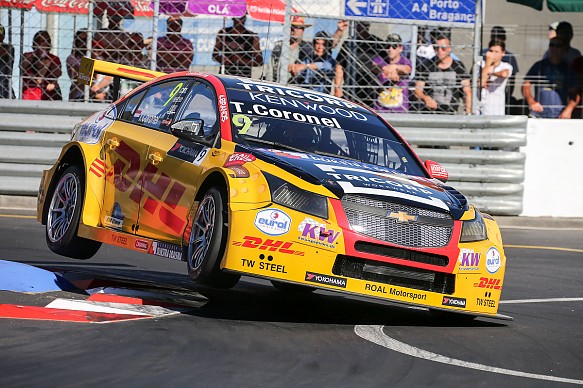 Tom Coronel took a controlled victory in the first World Touring Car Championship race on the Vila Real streets, keeping Tom Chilton at bay for his second win of 2016. Having started the reversed-grid race from pole, Coronel made a strong getaway and managed his pace from there until the finish to claim the sixth win of his WTCC career.

As Dutchman Coronel pulled away well at the start in his ROAL Motorsport Chevrolet Cruze, Chilton jumped ahead of Lada’s Nicky Catsburg with an impressive launch in his Sebastien Loeb Racing Citroen C-Elysee to snatch second.

Chilton looked the faster of the two in the early laps, particularly in the circuit’s heavy braking zones, but with the tight confines providing few overtaking opportunities, Coronel’s lead looked increasingly safe as the race wore on.

Coronel maintained a small but healthy advantage over the final few laps as the Yokohama tires held up better than feared in the Portuguese heat, eventually crossing the line 0.597 seconds clear of Chilton.

A second victory of the season means Coronel is the only man aside from Citroen’s Jose Maria Lopez to have multiple wins to his name in 2016, and also marked only the second time that Coronel has won two races in a year in the WTCC.

“Of course I felt the pressure,” said Coronel of Chilton’s chase. “He’s clever. He was strong in the braking zones where I was saving a little bit, but I didn’t make any mistakes.”

Catsburg hung on to claim third despite his brake pedal going long and his cooling system falling out two laps into the race, keeping Chilton’s team-mate Mehdi Bennani and championship leader Lopez behind.

Rob Huff completed one of only a handful of overtakes in the race to clinch sixth, getting by Thed Bjork into the roundabout at the end of the penultimate lap. Huff had attempted to line up the move earlier in the race, but got his best run coming off the Turn 19 right-hander and created a gap with his run down the hill before squeezing Bjork out.