Ford’s brand-new GT model led a clean sweep of the top-5 by GT Le Mans during Free Practice 2 for IMSA’s WeatherTech SportsCar Championship at Daytona International Speedway. Using the open tire rules in GTLM, the Michelin-shod cars made the most of the light rain that fell throughout the short 30-minute session.

The session was halted in the waning moments when multiple tire issues were encountered. The No. 007 TRG-AMR Aston Martin V12 Vantage had the tread come off its right-rear Continental tire (BELOW), according to team owner Kevin Buckler.

“We lost the tread and it did a lot of damage,” he said as the car was being pushed back to the garage. “The tread broke through the fender, and we’ll go back and look at what else needs fixing.”

With significant debris left by the 007 on the run to start finish, IMSA red flagged the session to clear the track.

One of Turner Motorsport’s GTD BMW entries trailed in under the red with its right-rear tire down, but the cause of the issue was unknown. A Continental spokesperson said its engineers would be looking at other wet tires to make further determinations, but based on multiple failures on the same lap, debris would be a likely cause. 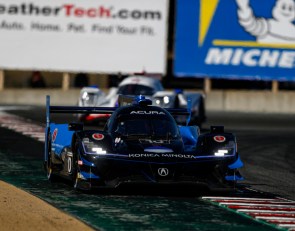 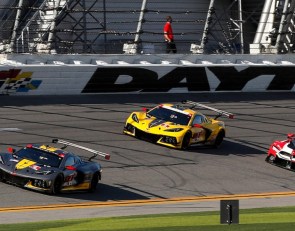 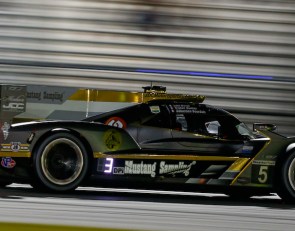