Minis will be big in the spotlight at this October’s Historic Sportscar Racing Fall Historics at Michelin Raceway Road Atlanta with the addition of the popular Can-Am Mini Challenge race as a featured event in an already packed schedule for HSR’s annual autumn visit to the 2.54-mile road course north of Atlanta.

Introduced in 2008, the Can-Am Mini Challenge brings together Canadian and American classic racing Minis from the early 1960s on up and a variety of related small-bore “specials” that share the unmistakable Mini DNA. Past Can-Am Mini Challenge events have been held at circuits such as Sonoma, Watkins Glen and Mid-Ohio.

The single-marque Can-Am Mini Challenge offers competitors five distinct classes to allow fair competition between the numerous levels of car preparation and sanctioning body event specific rules. All cars must run “A-Series” engines and are required to be genuine race cars with logbooks and proper safety equipment. A-series powered variations of the Mini are also welcome and include specials such as the Unipower, Landar, Canada Class and others.

Up to 25 classic race Minis are anticipated to take the green flag at Michelin Raceway Road Atlanta this October. Several Mini Challenge competitors have already officially entered the HSR Fall Historics, and this initial group is a good cross section of the wide variety of Minis and their competitive cousins race fans and competitors can expect to see.

Andrew Nelson is bringing his No. 11 Fortech Mini entered by Toybox Racing — a 1965 Mini Cooper S rebuilt to GT5 specifications in 1986 – to the Fall Historics. The full tube frame chassis was designed and built by Doug Peterson of Comptech in 1986, and the car won the SCCA Runoffs at Road Atlanta that year with Duane Davis driving.

Peterson himself drove the car to a 1989 Runoffs title at Road Atlanta. He returned to race the Fortech Mini in the 2003 and 2004 Runoffs at Mid-Ohio, where he won back-to-back National Championships in GT5. Nelson acquired the car in 2016.

Contrasting the wide-and-wild Fortech on the Mini competition spectrum is the 1964 No. 37 Morris Cooper S entered in the Fall Historics by John Wittenauer. This superb car was converted for competition use when it left the factory and was later imported to the U.S. in 1996 by Fred Opert Racing. Wittenauer has owned the car for 10 years and given it a thorough refurbishment, including safety upgrades required to allow the car to return to the track. 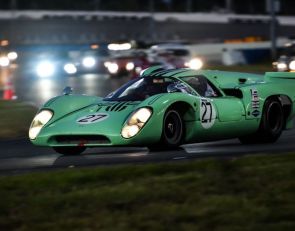 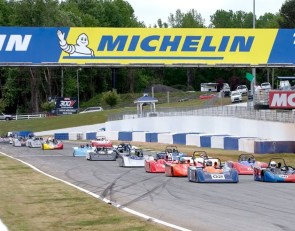