DRR is running four FX1-Xs in Nitro Rallycross’ premier ‘Group E’ category this year in partnership with leading European squad JC Raceteknik, with the third and fourth drivers set to be announced at a later date.

As well as being its first foray into electric racing, the RX Cartel deal will also mark the first time Monster Energy has backed an EV racing effort.

“We are extremely excited about the partnership with a legendary brand such as Monster Energy,” said DRR team owner Dennis Reinbold. “And combining the effort with champion drivers like Andreas and Robin with the new FC1-X Group E machines should make for a strong team as we take on some of the world’s best in the Nitro RX series.

“We feel this blending with Monster Energy, the champion racers and JC Raceteknik gives us a solid organization.”

Larsson drove an RX Cartel entry for DRR and JC Raceteknik in last season’s Nitro RX championship, finishing seventh in the points with a best finish of fifth. Bakkerud meanwhile ran a partial campaign with Subaru, and returns to the RX Cartel fold after running for it in the 2019 and 2020 World Championship seasons, finishing runner-up in the former.

While its IndyCar involvement has been limited to partial campaigns centered around the Indy 500 in recent years, DRR has been something of a fixture in U.S.-based rallycross since 2015.

In 2016 it won the Global Rallycross Lites title with Cabot Bigham, and has been a serial winner in the development class ever since. Last year Sage Karam contested the NRX NEXT series for the team (a successor to GRC Lites), and won more races than any other driver (five) en route to second in the standings, a non-start in the season opener due to a mechanical issue costing him the title.

It also graduated to the top tier of rallycross for the first time in 2021, running four Audi S1s in conjunction with JC Raceteknik. In what was a tricky season, the Audi not adapting well to the demanding American tracks, Tanner Foust was the best finisher, ending the year sixth in the points.

The 2022-23 Nitro RX season begins on June 18-19 at Lydden Hill in the UK, with races in Sweden and Finland following before a three-race stint in the US in the fall. After visits to Saudi Arabia and Canada, the series will return to US soil next March for its season finale. 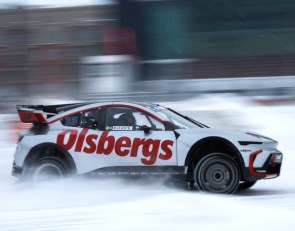