Red Bull won’t lodge a protest against the legality of the Mercedes rear wing at the Sao Paulo Grand Prix, but team principal Christian Horner is skeptical of how it achieves its straight-line speed advantage.

Lewis Hamilton came through from 20th on the grid in the Sprint to finish fifth, and then won the grand prix itself from 10th place on Sunday, making a number of overtaking moves using DRS, including on Max Verstappen for the lead. While a new internal combustion engine (ICE) played a part, Horner believes the characteristics of the rear wing could be questionable and wants Red Bull to try and work out how it generates such pace.

“We won’t be protesting at this race,” Horner told Sky Sports. “It’s important to understand where the speed has come from. Obviously, they’ve had a new engine here, they’re running Monaco levels of downforce.

“When he passed Max he was close to 30 kilometers quicker on that lap so it’s just something that we need to understand. It’s down to the FIA to police the sport and to govern it. We trust in them and their tests and their investigation.”

After seeing Verstappen — who was fined on Saturday for checking the Mercedes wing in parc ferme after qualifying — lead until lap 59 before Hamilton overtook using DRS, Horner believes there was no way of beating the Mercedes at Interlagos.

“I mean, the straight-line speed is really impressive,” Horner said. “That new engine, they’ve got a Monaco rear wing on here. It’s very, very impressive. Of course, as a driver for Max, he can’t defend against that. Any other driver had to be within 0.4 of a second to get anywhere near an overtake. The Mercedes were within 0.9, a second, they could be in the braking area at the end of the straight. That’s a very potent weapon with some very fast tracks coming up in the next few races.

“It’s always hard to take a loss when you’ve led for as many laps but that was against expectation. I thought Max did a hell of a job to keep Lewis behind for as long as he managed. We saw yesterday the pace of that car was just unstoppable today. For us, damage limitation. Congratulations to Lewis and Mercedes, they were very, very quick here. Important points for us. Checo (Perez) getting that fastest lap at the end there was damage limitation I would say.

“I think it was unraceable today. I think we put as big of a defense as we could. Max did his best, he raced hard but there was just no chance today. The highs of Mexico and Austin, you have, not a low here but it’s a tough one having led probably 75 percent of the race. One week to the next one – we will brush ourselves down and come back fighting in a week’s time.” 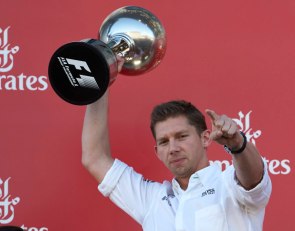