Acura, back-to-back winners of IMSA’s DPi championship with the ORECA-built ARX-05 prototype, have started the process of evaluating a new LMDh model for 2023.

RACER has learned that the French chassis constructor, whose ORECA 07 LMP2 design was transformed into the twin-turbo V6-powered ARX-05 DPi on behalf of Acura and Honda Performance Development, is working on a LMDh design study for the Japanese brand as interest in the formula builds. IMSA’s DPi regulations expire at the end of the 2022 season.

“We’re approved to continue racing in DPi with two new partners, and are having discussions with IMSA about the future and receive the technical working group information internally on LMDh,” HPD VP Steve Eriksen told RACER. “That’s the only item to report at this time.”

Provided Acura moves forward with an LMDh program, it would join Audi, which recently announced its LMDh plans, and other significant brands that are expected to adopt IMSA’s budget-minded prototype formula.

The appeal of LMDh, which is permitted to race full-time in both IMSA’s WeatherTech SportsCar Championship and the FIA’s World Endurance Championship, could continue to grow as auto manufacturers consider the two new prototype regulations to follow. The WEC-centric Le Mans Hypercar formula, which has Toyota and Peugeot as its highest-profile manufacturers, along with boutique constructors Glickenhaus and ByKolles who’ve opted in, does not currently offer the same two-way opportunities for competition.

Where LMDh models will be allowed to race at the 24 Hours of Le Mans and all other WEC rounds upon their debut, IMSA is likely to wait until the first season or two of LMDh is completed before introducing LMH to its series. Set to debut in March at Sebring, LMH will run independently of DPi in 2021 and 2022.

Scheduled for a January 2023 unveiling at Daytona, LMDh, which will make use of a new and spec hybrid system to be supplied to manufacturers in mid-2022, will face a two-year deficit to LMH with on-track development. In light of the experience gap, IMSA is known to have taken a wait-and-see approach to converging LMH and LMDh into a single WeatherTech SportsCar Championship class until the performance of both formulas can be adequately balanced.

As a result, the extended delay for LMDh means Audi, Acura, and others who commit will have an ample amount of time to refine their bodywork styling and internal combustion engine plans before serious testing can commence after the kinetic energy recovery systems are received in approximately 18 months. 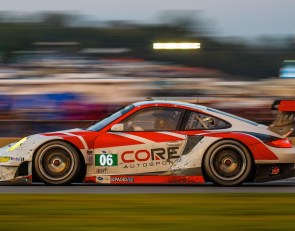