I’ve been dreading the arrival of October 12. Just past 10 p.m. tonight in Georgia, a wave of changes will begin, and by the time silence washes over the Road Atlanta circuit early Sunday morning, some of my favorite cars, teams, and people will be gone from IMSA’s paddock.

The WeatherTech SportsCar Championship is facing a worrying trend with the departure of some high-profile privateers.

CORE autosport’s Jon Bennett from DPi is hanging up his helmet. With his exit from the cockpit comes the end of CORE’s time as a prototype entrant; it’s Nissan Onroak DPi (pictured at left, above), along with co-driver Colin Braun and his father, race engineer Jeff Braun, will wake up as newly unemployed members of the sports car community. Fortunately, the rest of the crew members on the Nissan DPi program are expected to be reassigned elsewhere within CORE’s racing endeavors.

Ben Keating’s Keating Motorsports entry in GT Daytona is also set to turn its final laps as the passionate Texan departs Riley Motorsports with co-driver Jeroen Bleekemolen to try their hand in the FIA World Endurance Championship. Bennett and Keating could be joined by Magnus Racing’s John Potter, whose plans for the future remain intentionally vague after his team was encouraged to seek other employment opportunities if they arose.

As sports car racing’s canaries in the coal mine, its pro-am driver/owner group is a vital indicator of a series’ health. Consider me concerned.

Another, long-rumored change was confirmed in the last week as Action Express Racing announced the unlikely return of the No. 5 Cadillac DPi-V.R. Despite AXR’s flourishing, five-year relationship with sponsor Mustang Sampling, the underpinnings of the car’s financial support have fallen to the team’s silent owner, IMSA co-founder and current NASCAR president Jim France.

Uncertainty for the Mustang Sampling/AXR Cadillac. Image by Michael Levitt/LAT

Talk of significant cutbacks within NASCAR, and therefore IMSA, and a need to trim any and all unnecessary expenses, have been mentioned as the reason behind the change in support for the No. 5 entry.

With a sizable sponsorship gap to fill — DPi annual budgets have risen to IndyCar-like levels, with $5 million mentioned as a target to hit — the likelihood of finding what’s missing in time to continue racing with AXR’s championship-winning veteran Joao Barbosa and relative newcomer Filipe Albuquerque was deemed highly improbable. Albuquerque was confirmed as the new co-driver of the sister No. 31 AXR Cadillac funded by Sonny Whelen at the four long IMSA races in 2020.

The fate of Barbosa, a three-time Rolex 24 At Daytona winner and back-to-back IMSA Prototype champion from 2014-2015, and the crew for the No. 5 entry following Petit Le Mans is unknown.

IMSA will welcome a new president shortly after the championship celebrations conclude. Scott Atherton, whose work has come to define North American sports car racing since Bill Clinton was in the White House, is stepping back to focus on his family. He’ll still pop up from time to time as IMSA makes use of his exceptional experience in negotiating with the organizers of the 24 Hours of Le Mans.

Decades of front-engine factory Corvette race cars will be relegated to history as Corvette’s C7.R, with its bassy V8 motor, are readied for the mid-engine, high-revving C8.R.

Fans feeling nostalgic about Corvette’s upcoming model shift will need to prepare for a bigger change as Jan Magnussen bids farewell to the program after 16 seasons. His departure, as RACER wrote in June, might not be the only alteration to the team’s familiar line-up.

Porsche’s first-generation 991-based 911 RSR is also due for a refreshing, with a new chassis featuring side exhausts coming in January. For those who love the unmistakable scream delivered by the current 911 RSR through its rear-facing exhausts, it will be heard for the last time at Petit Le Mans.

Ford’s four-year GT program also reaches its swansong, although as Ford Performance boss Mark Rushbrook told us, one or more of the factory cars could pop up in the hands of privateers at selected endurance races.

IMSA’s gathering this week in Road Atlanta also marks the culmination of its 50th anniversary celebrations. All of the throwback liveries, visits by legendary drivers and team owners, and general reverie for the series’ incredible past reaches its culmination.

It was a wonderful season to look back at all IMSA has achieved and take stock of where it’s headed. Once it arrives, the 51st season will herald more adjustments than its founders could have foreseen. 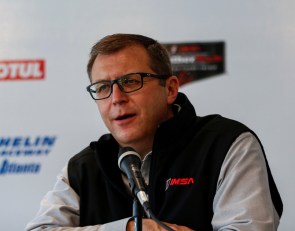