Let’s call a spade a spade – the French Grand Prix will not go down in history as one of Formula 1’s classic races.

A Mercedes-only fight for pole position followed by a dominant Lewis Hamilton performance are the headlines most will remember, if anyone remembers the weekend at all. But there was action elsewhere, and a dramatic ending that threatened to move the race rating up by half a point.

Sadly, all the ingredients for such an outcome had been there from the very start. Mercedes was comfortably quickest and locked out the front row. Ferrari had the measure of Red Bull – even if Sebastian Vettel struggled – and McLaren was a clear fourth-fastest and able to start on the medium tire, as all the top eight did.

So the frontrunners were always going to ease away in pace order with the ideal strategy available, while Pierre Gasly and Antonio Giovinazzi faced a much tougher time trying to make the softs work from row five.

The latter opened up the drama that included the two Renaults and Kimi Raikkonen on the final lap, but the catalyst for that was Lando Norris suffering a hydraulic problem that he had to try and contain until the end of the race.

And it’s that very issue that highlights what I think is one of the fundamentally flawed aspects of F1 at the moment. Reliability.

You only have to look through the sport’s history to see teams have regularly dominated in different eras. Ferrari, McLaren, Williams, Red Bull – they’ve all had sustained spells as the outright benchmark, and now it’s the turn of Mercedes.

But in those previous eras, reliability played a big role in the sport. These cars are cutting-edge, designed to push the limits of what is possible and find new ways of delivering performance. That means innovating, and taking risks.

Yet for many components, the current regulations place an emphasis on reliability. Instead of an engine being built to do one race distance and then be scrapped – expensive and environmentally insensitive, I know – now they are meant to do at least seven grands prix over a season, or more than 10 for certain elements of the power unit.

That means the definition of unreliable has gone from an item that may not last the race – but will provide a performance advantage if it does – to one that is deemed a failure if it only covers five rounds. Using that example, even a component struggling to do that distance is only likely to hit trouble every five races – or four times in a year.

Fernando Alonso’s Renault detonates at Monza in 2006. A note to anyone who is new to following F1: this kind of thing used to happen a lot. Image by Etherington/LAT

The need to extend the life of components in order to avoid a penalty leads to a conservative approach too often, and in turn removes the jeopardy that used to exist of watching a race and thinking a car could hit trouble at any moment.

For example, as painful as it was for Norris, the tension of the final stages of Sunday’s race from a McLaren point of view was massive. You’re likely to have either wanted the rookie to hold on heroically as he lost braking performance and power steering, or you’ll have been rooting for someone like Daniel Ricciardo or Raikkonen behind to take advantage.

Across all eight rounds that we have had so far this season, there have been a grand total of 16 retirements. That’s an average of two per race. Or, put another way, 90% of the cars that start the race finish it. When you try and line the cars up in performance order, and are likely to have 90% of them finish, the chances of a shock result are greatly reduced.

In France, the only retirement was Romain Grosjean. And why? Because Haas took advantage of the regulations in a race it was struggling in, retired the car tactically and can now take fresh components like a gearbox in Austria, thereby reducing the chance of a failure when it actually has something to lose.

Other variables have been removed by things like the pit stops. Drivers wanted harder tires to push on, so they now have compounds that are able to do a one-stop at most venues. With no refueling and pit stops that take around three seconds, it’s a very small window in which for anything to go wrong.

As impressive as they are, do three-second pit stops improve F1 at all? I’d say no. Average Joe doesn’t change his tires in the same way, so it has no relevance to the real world. He does, however, fill up his car when it runs out of fuel…

If more pit stops were possible due to refueling – and shorter stints – teams could find different ways of making the tires work, or of getting the most out of their car. For example, the McLaren in France was much more competitive compared to Red Bull on low fuel than high.

That’s not to say we wouldn’t still have boring races, but as they played out there would be that bit more doubt that a car is going to make it to the end.

I’d also like to pick up on what makes a boring race boring. If you sat and watched the French Grand Prix, you were probably bored, because there was no battle for the win. No threat to Hamilton at the front.

If you sat and watched IndyCar at Road America, you got the exact same style of race. Alexander Rossi was untouchable.

Was Rossi’s dominance at Road America really that different to the one-man show at Paul Ricard a few hours earlier? Image by LePage/LAT

Yet, so much of the reaction to the French GP used IndyCar as the stick to beat F1 with. Road America is a cooler track than Paul Ricard, but it was midfield battles that were pointed to as highlights. I don’t like comparing the two because they’re totally different series, taking very different approaches (which is needed so there’s room for both), but in certain aspects Sunday’s races were similar.

At Paul Ricard, the last lap scrap aside, there was also some really good racing between the two Toro Rosso drivers, and a mega move from George Russell around the outside of Robert Kubica at Signes after a strong battle. Those were the main highlights – the other passes were more simple, usually using DRS as an aid in the same way push-to-pass helps.

I’m not saying it was a good race in France – far from it – but when you break it down, you had uncertainty who would finish second until the final corner, the same for positions P7-P10, hard wheel-to-wheel racing for those final points and drivers giving it their all even against their team-mates with nothing but pride at stake.

For me, that highlights how a combination of things can lead to the boring race impression. The lack of jeopardy throughout meant the last lap excitement was unexpected and didn’t paper over the cracks. And the lack of grass run-offs and walls made it all less impressive, somehow.

But compare it to Canada, where the top 10 positions were solidified before the end. Some late moves by Lance Stroll and Daniil Kvyat secured the last points places as a McLaren faded at the end. A top-three car in the form of Valtteri Bottas’ Mercedes had to make some overtakes on the likes of Renault – much like Vettel had to on McLarens in France – and only two cars retired. Sound familiar?

The big difference was a fight for the win, and a circuit that didn’t come in for criticism even though it actually delivered a very similar race.

As Marshall Pruett pointed out after Sunday’s race: “All that’s missing is a consistent protagonist for Hamilton.

“Having watched every minute of the 1988 F1 season and been riveted by Senna and Prost winning 15 of 16 races, it’s possible for two to make the show.”

There’s plenty for F1 to improve on, but give us a fight for the win and the increased possibility of failure when there isn’t one, and you’ve got yourself a much more compelling watch. 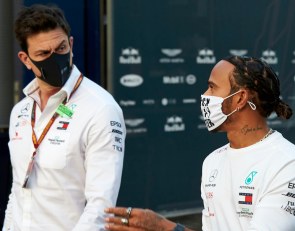