Eric Boullier has resigned from his role as racing director at McLaren as the struggling team undergoes further restructuring of its racing operations.

Pressure had been growing on the Frenchman this season after McLaren failed to deliver the performance expected with its 2018 car after switching to Renault power units. Boullier — a former team principal of the Lotus team that became Renault again in 2016 — steps down with McLaren sixth in the constructors’ championship on 44 points, 18 adrift of the works team and 145 behind fellow Renault customer Red Bull.

Following his work with the team at last year’s Indy 500 and a more recent consultancy role, two-time Champ Car champion Gil de Ferran is also appointed in the new role of sporting director. De Ferran previously held a similar role for Honda’s F1 outfit from 2005-7, and is tasked with maximizing the effectiveness of the team’s racing package.

“The performance of the MCL33 in 2018 has not met the expectations of anyone at McLaren, especially our loyal fans,” CEO Zak Brown said. “This is not the fault of the hundreds of committed and hard-working men and women at McLaren.

“The causes are systemic and structural, which require major change from within. With today’s announcement, we start to address those issues head on and take the first step on our road to recovery.

“I would like to take this opportunity on behalf of the entire team to thank Eric for his service and contribution to McLaren and wish him well in his future endeavors.”

Boullier himself made a short statement in the McLaren announcement, as he departs just days before the start of the team’s home race at the British Grand Prix.

“I am very proud to have worked with such a brilliant team over the past four years, but I recognize now is the right time for me to step down,” Boullier said. “I want to wish everyone at McLaren the best for the remainder of the season and for the future.” 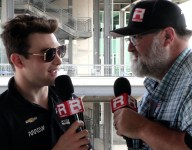