Denmark’s Michael Christensen completed a “Dream Week” for Porsche Sunday at Road America when he drove the No. 24 Alegra Motorsports Porsche 911 GT3 R to a 2.2-second GT Sprint victory in 50-minute Pirelli World Challenge Round 7 event.

Last Sunday, Christensen teamed with Kevin Estre and Laurens Vanthoor to capture the LMGTE Pro class at the 24 Hours of Le Mans and then scored a dominant victory Sunday in the PWC GT Sprint event for his second PWC win of the 2018 road racing campaign.

In the other Pirelli World Challenge classes Sunday, it was 17-year-old Parker Chase nipping veteran Martin Fuentes by inches (0.008 seconds) to capture the GTA category, Ian James taking his second GTS win of the weekend and local favorite Jeff Courtney of Milwaukee scoring his first GTSA victory in the Maserati GT4.

Christensen made a sensational start Sunday in the 21-lap GT/GTS feature following the Verizon IndyCar Series race at Road America. Michael was able to extend his advantage to 3.2 second by lap four and cruised to the win over Saturday GT Sprint race winner Alvaro Parente of Portugal in the No. 9 K-PAX Racing Bentley Continental GT3.

“The last two weeks have been pretty amazing for me,” said Christensen. “Completing a career goal and winning at Le Mans was a dream come true for me and it’s an amazing feeling. We’ll try to keep it going and the car has been really good the last few races. So, we’ll keep at it. It was great to be back in front again after Saturday, which was a messy race for me. The start wasn’t great from the first row and then the re-starts didn’t really go to plan for anyone except for Parente. I was lucky to get a click-in a decent lap yesterday to get at least in the second row today.

“I knew I just had to stick with Alvaro through Turn 5, and I thought I would have a good shot on it. I knew that I could put pressure on him. He decided to defend himself into turn five which was good for me. Everything went to plan.”

Chase, who just graduated from high school earlier this month, came back to challenge Fuentes in his No. 19 TruSpeed Autosport Audi R8 LMS sports car in GTA division late in the event and was able to get a last turn run to pull alongside at the finish line. The Audi racer clipped the timing light just 0.008 seconds ahead of Fuentes’ No. 007 Squadra Corse Italia Ferrari 488 GT3. It was Chase’s second GTA Sprint win this season and third overall win in 2018.

“On the restart I really messed up,” said Chase. “From then I thought it was over. But when I saw the white flag, I really started pushing because I saw a lot of GTS traffic ahead. I knew that if I got there I would have a chance at getting around him. The GTS traffic really helped out in my favor. Coming around Turn 14, Martin was slower than me and I got a better run out of turn 13 and I just went for it. There wasn’t much room, but I did what I had to do so I just tried to go for it and it worked and we were side-by-side the whole way up the front straight. I didn’t even know who won — I had to ask one of the photographers. It was super close.”

For the second straight day, James held off a strong challenge from GTS Overall point leader James Sofronas in the No. 14 GMG Racing Audi R8 LMS GT4 and 18-year-old Harry Gottsacker in the No. 69 Racers’ Edge Motorsports SIN CAR 2 GT4.

“What a great weekend for Team Panoz,” said James, who won both GTS race last year at Road America also. “The race was really close. I had the Mustang, SIN CAR and Audi, everybody basically side-to-side around this race track. I’m so proud of the hard work that everybody does. Thanks for Don Panoz’s continued support in this magical weekend. Sofronas and the Audi definitely got top speed on us, but, after 49 minutes, I definitely wasn’t going to give it up without a fight. I hope to keep the four-for-four alive for next year.”

“Road America is my home track and I have been racing here for a long time,” said Courtney. “We had a bunch of family, friends and sponsors on hand this weekend including the Patriot Education Fund which we helped raise money for them. The Maserati was strong this weekend and I’m very happy to put the car in victory lane at Road America.”

The Pirelli World Challenge Championships now move to Portland International Raceway on July 13-15 with all eight series classes competing in its first PWC event at the track since 2006. 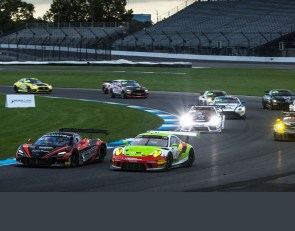 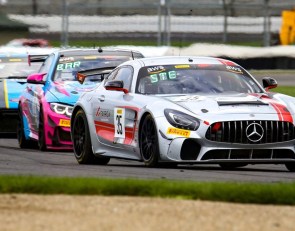 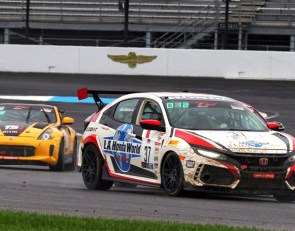