Toni Vilander blew past the track record on the streets of Long Beach Saturday morning, driving the No. 61 R. Ferri Motorsports Ferrari 488 GT3 to his second pole of the year for the Pirelli World Challenge Round 3 GT Sprint event as part of the Toyota Grand Prix of Long Beach.

Vilander – who has started the season off with poles on both street circuits, a podium at St. Pete and two SprintX wins at Circuit of The Americas with Miguel Molina – posted a lap of 1m18.436s (90.35 mph) as five GT entries bested the track record of 1m18.883s (89.84mph) set last year by Alvaro Parente in his K-PAX Racing McLaren at the 1.968-mile, 11-turn temporary street circuit along the Long Beach harbor.

“It was quite a difficult session,” said Vilander. “But the team did a great job preparing the car for qualifying. On the main straight, I was trying to look for the big screen, so I could see if I was in the top three. The grip level changed a little bit during the session, so I just needed to keep hammering down and do those laps, lap after lap. Suddenly, I felt that it all came down to me and I wanted to close the lap. The first part of the lap was a few risks and the last part of the lap was taking it home.

“It was a pretty good balance with the car. But on these street circuits, you just have to go for it, building that speed from first practice to second practice and into qualifying. We enjoyed today (Saturday) and Sunday is another hard fight in the race.”

Vilander will be joined on the front row by CRP Racing’s Daniel Morad, who finished 0.206s behind in the No. 2 CRP Racing/DeVilbiss Mercedes-AMG GT3.

Rocky Moran Jr. will start 11th overall in the No. 71 Audi R8 LMS, a feat given that the Irvine native couldn’t practice on Friday and turned his first laps in the car on Saturday. His TruSpeed Autosport team worked into the late hours to put in a new engine. 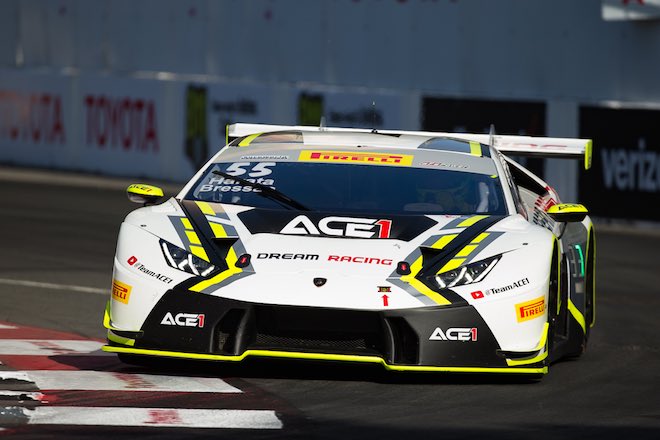 Yuki Harata of Dream Racing Motorsport took his first GTA pole with a best lap of 1m19.157s, shattering the 1m19.842s (88.735mph) track record set by Martin Fuentes in 2016. Harata and Fuentes, who will start seventh and eighth overall, outqualified the K-PAX Bentley Continental GT3s of Parente and Rodrigo Baptista, who will roll off ninth and 10th.

“It was my first time at Long Beach and the second time in a street circuit,” said Harata. “I worked a lot on this in a simulator, but I did spin one time. Thankfully, I didn’t hit the wall. The car was really good with the setup, so I could push hard. I’m happy with the result and looking forward to the race Sunday. The simulator really helps a lot. Here (at Long Beach) it’s all about the qualifying position because it’s hard to overtake once you start the race. I’m very happy to start in the front.”