The amazing story of Billy Monger took another dramatic turn Saturday at the Oulton Park circuit. The 18-year-old Briton, who lost the lower part of both legs in a British F4 accident last April, claimed a podium finish on his British F3 debut.

Monger started fifth, kept his nose clean on the opening lap and then avoided a clash between Krishnaraaj Mahadik and Clement Novalak to climb to third behind Linus Lundqvist and Nicolai Kjaergaard. Although not quite able to match the pace of the lead duo, Monger – making his return to racing after almost a year of recuperation – was never seriously threatened from behind, with Tom Gamble in fourth unable to put him under significant pressure. Monger held a second advantage over his nearest rival for the majority of the race, and when Gamble did reduce the margin, Monger was quickly able to restore it.

Monger received a hero’s reception on the podium after the race, after walking onto the podium to collect his trophy.

Polesitter Novalak got plenty of wheelspin at the start, and was passed on the run down to Old Hall on Lap 1 by fellow front-row starter Lundqvist and by teammate Kjaergaard. Holding third midway around the lap, contact between Novalak and Mahadik resulted in Novalak retiring on the spot, delaying Mahadik, and promoting Monger up to third. 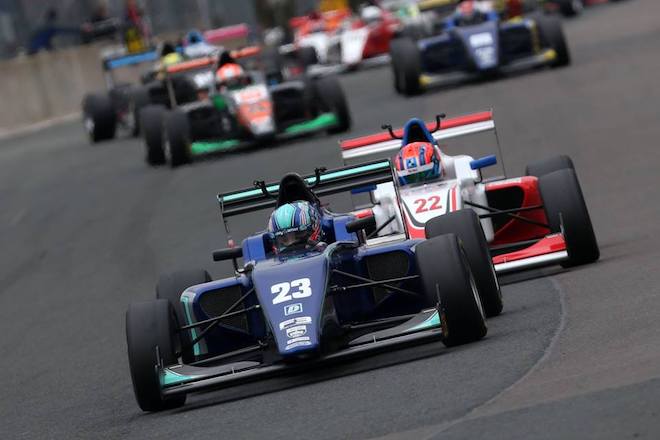 The safety car was deployed to cover the incident, with racing resuming at the end of Lap 3. From there it was a straight battle for the lead between the two Scandinavians, with the pair separated by less than a second throughout. Kjaergaard closed the gap toward the end and threatened for the win, before ultimately settling for second.