On Sunday at Circuit of The Americas, Mark Wilkins led a 1-2 Hyundai sweep with his Bryan Herta Autosport with Curb-Agajanian teammate Michael Lewis in Round 2 of the opening TCR Class events in the Pirelli World Challenge Grand Prix of Texas.

Wilkins, pole winner in both TCR contests at COTA this weekend, protected his position entering Turn 1 at the 3.427-mile, 20-turn racetrack southeast of Austin. The 34-year-old sports car veteran kept a strong pace throughout the 14-lap race in the No. 99 BHA Hyundai i30 N TCR and held off Lewis, the Saturday TCR winner, by 0.512 seconds at the checkered flag.

The impressive performance by the Hyundai i30 N TCR hatchbacks saw Wilkins sweep practice, qualifying and Round 2 with Lewis, driver in the No. 98 BHA Hyundai i30 N TCR, capturing the Round 1 40-minute sprint race. Third for the second consecutive TCR race was veteran Ryan Eversley in the all-new No. 43 RealTime Racing Honda Civic Type-R TCR car.

“My racecar arrived later than Michael’s car and we just ran it for the first time out this past Thursday,” said Wilkins, a race winner in various categories including PWC GT and GTS classes. “The car ran flawlessly and it was a great first weekend for Hyundai and Bryan Herta Autosport. It’s going to be a very exciting season with many top drivers, teams and TCR cars. It’s always great to win and this weekend seemed like a perfect way to start the year for us. Now, we move to VIR (April 27-29) and hope to continue this trend.” 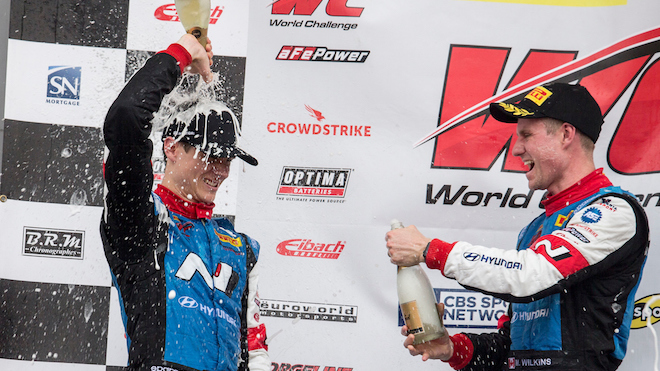 “For today’s race, Mark got off the starting line well and it is a team effort for me,” said Lewis. “It really didn’t matter if I won or Mark won, and he had a strong Hyundai i30 N TCR this afternoon. Yesterday, I got in a good move to take the lead on the first lap and today, it was Mark’s turn. As long as we are 1-2, that is the goal. Once Mark grabbed the lead, I want to slot in right behind him and protect the 1-2 for Hyundai. Ryan is tough, and I had to watch my mirrors to see where he was. In the end, it was a spectacular debut for the Bryan Herta Autosport team and the Hyundai i30 N TCR at COTA.”

Said Eversley: “This new TCR platform debuted here this weekend with Pirelli World Challenge and it looks like it is a hit already.

“This Honda Civic Type-R TCR is based off the street car and it is marketed globally now. Before we didn’t get the cool cars and part like Europe, now we get the awesome street cars and the race cars in the U.S. The driving talent and racing teams like Bryan Herta’s and our RealTime Racing team coming to the TCR class is a big asset for the new series in this country. I think you’ll see more growth soon in TCR.”

Finishing out the top-five TCR positions Sunday were Anthony Geraci in the No. 69 Heinlein Racing Development Audi Sport RS3 LMS and Nate Vincent in the No. 72 FCP Euro by HRD Volkswagen Golf GTI TCR.

The TCR, TC and TCA classes return to Pirelli World Challenge competition on April 27-29 at the pretty VIRginia International Raceway in Danville, Virginia. The next PWC event will be a GT/GTS event on the streets of Long Beach, Califorinia, as part of the 44th Toyota Grand Prix of Long Beach on April 13-15.