When you’re the only wheelman in history to win the Rookie of the Year award in NASCAR’s Camping World Truck Series, Xfinity Series and Monster Energy NASCAR Cup Series – and to do it all in the span of three years – you’re a standout in every sense of the word. And you also carry a heavy load in that all sort of expectations, hopes and dreams are riding along with you on any given Saturday or Sunday. Welcome to the world of Erik Jones. Coming off an admirable freshman Cup season, the pride of Byron, Michigan is looking to 2018 as the year that puts him on higher ground.

Q: Erik, it’s your second year as a Monster Energy NASCAR Cup competitor and you’re now five rounds into 2018. How do you feel about everything thus far?

EJ: I think it’s been good. We fired off with a few more top 10 finishes than we had last year, which has been good. We just been working through some stuff, but I think overall we’ve had really good cars. We’ve had to work really hard at the start of the race to get our car where we needed to. We’ve been working on just firing off better during the first run. We just need to improve on that initial run to be a little bit closer.

Q: You were the 2017 Monster Energy NASCAR Cup Rookie of the Year. Did having an entire Cup season behind you help you and the team heading into the opening phase of this year?

EJ: It did. It gives you a really good baseline coming into every weekend, especially with a track like Fontana where there are so many choices of lines and so many choices of where you can find speed on the track. Coming back here this year, I just feel like I had a real good idea where to run right of the bat. Last year, I really had no idea. You can look back on all your data from last year and some of the videos and stuff you had, and it’s a big help. I mean, you can watch video as much as you want before you go to a track for the first time, but until you really get out there and really feel it out, you don’t have a good idea of how things should be. I have a baseline of where I kind of where I want my cars to be now. I feel like going to these tracks now, I can do a little bit better. I think all of that has made it easier on us as a team; showing up each weekend and not having to work so much on the driver and being able to work a little bit more on the race cars throughout the whole weekend.

Q: You ran the 2017 season in the No. 77 car for Furniture Row Racing. Then, late last summer, it was announced that you’d be shuffled over to the No. 20 car to replace veteran Matt Kenseth at Joe Gibbs Racing. A big difference in programs?

EJ: Well, I think it is different in some ways, and in some ways it’s the same. Obviously, the cars are very similar with the alliances we have. With JGR, there are just a lot more resources that you can use between not only having a few more teammates, but also having more people in-house that are working on driver betterment. There are guys pointing things out like, ‘Hey, you can work on this and you can work on that.’ That’s something I didn’t really have last year. Now, having dedicated people that I can lean on that and work on that stuff each week has been a pretty big advantage for me. Having that kind of core group around me has made a big difference. 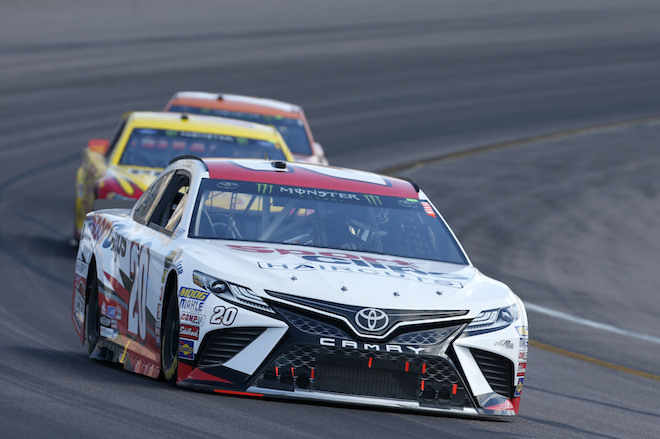 Q: You raced to five top-five finishes and 14 top-10 finishes in 2017. You also suffered eight DNFs. Still, more than a few people in the garage were quietly surprised that you did not win a race in 2017…

EJ: I felt last year there were a couple chances where we had opportunities to win. We just weren’t able to quite seal the deal. This year coming in, that’s a big goal. We want to win a race this year, and I think that’s a reachable goal, for sure. We wanted to win one last year. This year, though, I think we’re in a really good spot. We had some issues last year that we needed to work out that we have sorted out this year. I think we can be in position to challenge for some more wins here this year, and we’re getting closer and closer each week as this year has started out. Yeah, we want to win a race and I want to win a race, and hopefully that is coming soon

Q: Realistically, come Homestead in mid-November, what type of results will make you pleased about the 2018 race season?

EJ: I think for us, looking back on last year and what we did, and all the DNFs that we had, knocking those down is a goal. Also, I think a few more top-five finishes is also a good goal for us. And hopefully, we’ll get a win or two. Making the playoffs is also a big goal for us this year. There is no reason why we shouldn’t make the playoffs and be in contention there. We’ll see as the year goes on, and how those goals will get readjusted. A win and making the playoffs, for sure, is going to be big for us.

Q: What do you think you need to work on to be a better driver?

EJ: There always things that a driver, even veteran drivers, need to work on. For me, a lot of it is working more to know what exactly I need in each race in the long run. I keep working with [crew chief] Chris [Gayle] on adjustments that we make throughout the day. Pit road stuff, too. I never really knew what a big deal the pit road stuff was. So much time can be gained there. There is so much time gained and lost there, so that is something pretty cognizant of the last year, and something I’ve been working pretty hard on.