Corvette Racing returns to Sebring International Raceway for the 20th time this weekend in the quest for a fourth consecutive victory in the GTLM class of the Mobil 1 Twelve Hours.

The team has recorded 11 victories since first racing at the historic venue in 1999, all of them coming since 2002 (pictured below). Consecutive victories have been the habit for Corvette, winning four straight from 2006-09 in addition to three in a row in both 2002-04 and 2015-17. 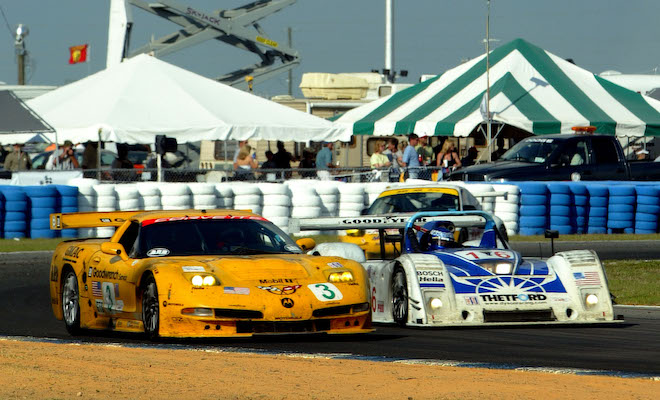 But the Corvette Racing drivers are not going back to the record books for Saturday’s endurance test. Instead, they are looking ahead to the 2018 IMSA WeatherTech SportsCar Championship, of which they feel Sebring is a key event.

“Winning at Sebring last year was a big reason we won the GTLM championship,” said Antonio Garcia, driver of the No. 3 Mobil 1 Corvette C7.R. “Everything came together late in the race – our performance, strategy and execution. That carried over for the rest of the year. We did it again at Daytona this season and ran a perfect race but had no chance at a victory, so we know how difficult it will be to win Sebring again. What we may lack in performance we make up in experience with data at Sebring. I hope that gives us an edge.”

In addition to the many highs, though, there have also been some lows in the event.
The team thought it had victory in its grasp back at the 2001 12 Hours, only to lose to Konrad Motorsports’ Saleen S7R on a stellar closing drive by Oliver Gavin. It’s no coincidence that Gavin joined the Bow Tie Brigade the following season – sharing in Corvette’s first Sebring triumph.

Back in 2005, Johnny O’Connell lost the brakes in his new C6.R and spun into the tire barrier. He was able to continue, and the team finished the race following repairs. Two years ago, Magnussen was taken out while leading in Turn 1 midway through the race in the No. 3 Corvette – although the team’s No. 4 entry went on to win.

For 2018, Corvettes placed third and fourth in class in the season-opening Rolex 24 At Daytona, chasing a pair of Chip Ganassi Racing Ford GTs throughout the event. Garcia, Jan Magnussen and Mike Rockenfeller finished third in the No. 3, two laps behind the winning Fords, followed by the No. 4 Corvette of teammates Oliver Gavin, Tommy Milner and Marcel Fassler. Both three-driver line-ups return to the respective cars this weekend.

Gavin enters the race with six victories and 10 podiums at Sebring – trailing all-time event leader O’Connell by two in both categories. He’d like to halve that distance this weekend.

“Sebring for so many years was the start of our racing season,” Gavin said. “Now we have the Rolex 24 At Daytona, but physically Sebring is much harder. The physicality of the track, speed of the circuit and how the race unfolds is a big challenge. Turn 17 is one of the craziest and hardest corners on any track in the U.S. It’s a wild ride and that really sums up the Sebring circuit. You feel like you are on a bucking bronco the whole time.”