Hamilton hoping to battle with Ferrari and Red Bull

Hamilton hoping to battle with Ferrari and Red Bull

Lewis Hamilton insists he wants to be fighting with Ferrari and Red Bull for the championship this season, ahead of the final day of pre-season testing in Barcelona.

Thursday’s running saw Sebastian Vettel set the pace with a 1m17.182s on the hypersoft tire, a time nearly a second quicker than anything seen so far during testing. By contrast, Mercedes was focusing on high fuel running on the penultimate day and Valtteri Bottas completed an impressive race simulation, but Hamilton says he wants to be racing other teams for victories this year.

“Of course, the ultimate goal is that we hopefully have more teams fighting for the championship,” Hamilton said. “I think there was one year where had six different winners in the first six races, or whatever it was. That’s only good for the sport.

“The more competition there is, the more fun it is to watch. I, like you, have grown up watching the sport, being a fan of it and seeing it when it’s been a one-team championship and seeing it when there’s been a couple fighting, so I am really hopeful.

“I think Red Bull could be a real challenge this year – their car looks great and I haven’t seen anything from what Ferrari have been doing, but for sure they’ll be good. It’s going to be exciting.” 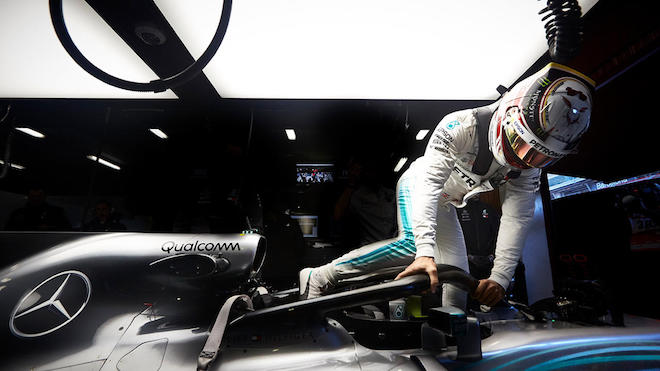 When he was informed of Vettel’s lap time from Thursday, Hamilton responded: “Oh, I don’t know if that’s a good time or not. I don’t think it’s faster than what we did a couple of days ago. I don’t know if it’s a qualifying run, I don’t really know, I don’t really care. It’s testing. I think someone said I was down in 11th today – it doesn’t matter. It matters where we are in qualifying, in Q3 in the first race when everyone’s on low fuel.

“For example, for us we’ve not been on low fuel yet, so I have no idea where the car can go. I hope it’s good – I hope it’s a good, good time so that means that they’re strong and that means we have a race on our hands.”

Hamilton will carry out a race simulation on Friday morning, and the Briton says it is a motivation for him to be finding out how the Mercedes reacts as well as getting to measure up against his teammate.

“I think tomorrow we will hopefully be doing a race distance, as Valtteri did today, which I believe went well. In that, it’s more like competition, so that’s where you take it a lot more seriously and really try to take a lot more notes, because the cars are behaving differently between each run, the settings… you might need to change all those little things.”