Honda 'made a lot of progress' over winter - Tost

Honda 'made a lot of progress' over winter - Tost

Toro Rosso team principal Franz Tost is encouraged by the start to life with Honda after seeing “a lot of progress” from the Japanese power unit manufacturer.

Honda struggled throughout a three-year spell in partnership with McLaren, with both performance and reliability often lacking compared to its rivals. Reliability was improving toward the end of 2017 before the switch to Toro Rosso over the winter, and the new partnership started the first day of pre-season testing with plenty of mileage at the Circuit de Barcelona-Catalunya.

Tost (pictured at left, below, with Honda F1 technical director Toyoharu Tanabe) believes the solid start is the result of good improvements made by Honda during the off-season and is optimistic for the team’s future. 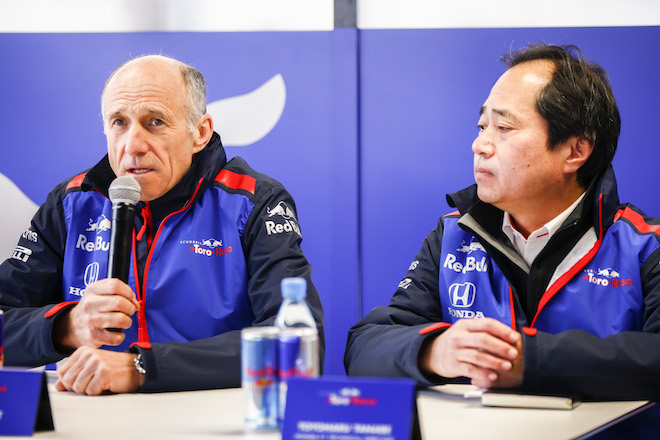 “I don’t see any problems – the power unit is working quite well and I am convinced Honda has the capacity and the know-how to develop the engine from to a level that we will be there, where we expect to be and this is how it is,” Tost said. “I see it as very, very positive because Honda have made a lot of progress in the last months on the reliability side as well as the performance side, so we are looking forward to the season.”

Tost reiterated his belief that Toro Rosso can fight for a place in the top five of the constructors’ championship, but admits he has yet to make that a hard target.

“I said once in an interview that the first three places are gone this year because there is Red Bull, Mercedes and so on. But from fourth place on though there’s a lot to fight for between Force India, Williams hopefully Toro Rosso, McLaren, Renault and so on.

“I have to get a clearer picture of our performance here and the first two or three races, but the target for Toro Rosso is to be in front of the midfield and this is around fifth place.”

Toro Rosso ended the morning session of the opening day of testing with 72 laps to its name, with only Renault (73) completing more mileage by the lunch break.

Despite this slight hairy moment, it’s been a productive morning for @ToroRosso, with 66 laps on the board so far for Hartley in the STR13 ?#F1 #F1Testing pic.twitter.com/1fDxNEAjqw