The veteran Continental Tire Series squad will make its debut in IMSA’s top category next month using an Acura NSX GT3 at the 12 Hours of Sebring, where Marc Miller and Till Bechtolscheimer will lead the driving duties. CJWR’s part-time schedule will also include visits to Watkins Glen and the season finale at Petit Le Mans; additional drivers for the three endurance races will be named at a later date.

“As a young kid watching IMSA races it was always my dream to race in the premier sportscar series,” said Wilson, who continues to develop a driving career of his own. “It looks like I still have some time before I race in WeatherTech but happy for Marc and Till to take on the toughest track in the country in the NSX. We have been aiming to get into this paddock for years but now the real fight begins to see what we can do against the much more experienced teams.”

The news of CJWR’s WeatherTech Championship plans, which were announced on the Midweek Motorsports show with IMSA Radio host John Hindhaugh, follows nearly one year of exploring which GT3 model would best fit the team’s needs.

“Between RealTime and Shank the last two years, if you look at that cumulative data, they’ve put a lot of miles on these cars and they’ve figured a lot of stuff out. HPD has been very helpful with that,” Wilson said of the Acura decision. 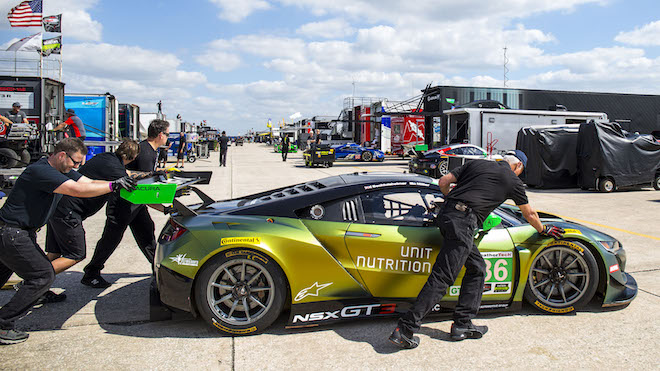 With the shuttering of CJWR’s Continental Tire Series program, GTD will serve as the sole focus for Miller and Bechtolsheimer.

“Having missed the Rolex 24 and Roar tests, we do have an uphill climb not having the amount of track time or experience compared to the competition,” Miller said. “Our focus is to treat this season as a learning experience and hopefully make some solid impressions against a very sturdy GTD field.”

For Bechtolsheimer, whose racing exploits also involve a variety of vintage machines, graduating to GTD has been a long-held dream.

“The move to WeatherTech Championship is a big step for the team and an even bigger step for me but I couldn’t be more excited,” he said. “Competing in GTD has been my goal for some time and I hope my time in GS has given me a solid foundation. The 2018 season is all about learning and finding our feet in a hyper-competitive series.

“It’s hard to believe I’ll be lining up on the grid of the Sebring 12 Hours in just a few weeks. It’s one of the most iconic races in the world and one that I had always hoped I would get a chance to participate in. I hope that sometime in the car at the Sebring test will help get us ready for the challenge.”