Tyler Reddick blocked with the skill of an offensive lineman over the closing laps and held on to win Saturday’s PowerShares QQQ 300, the NASCAR Xfinity Series opener at Daytona International Speedway.

In a two-lap dash that ended a race that reached new levels of ridiculousness, Reddick edged series veteran Elliott Sadler by a few feet in a photo finish during the fifth overtime. Video clearly showed Reddick slightly ahead at the line, however.

“Oh this is going to be a photo finish guys.”

You called it, @Keselowski! pic.twitter.com/HMaJVS9hkG

The side-by-side finish was so close that NASCAR’s scoring system, didn’t register a margin of victory for Reddick over Sadler. NASCAR said it was the closest race since electronic scoring debuted in 1993.

“It was a tough finish,” Sadler, who also drives for JR Motorsports said. “Tyler did a great job on the restarts, keeping his momentum going and blocking good. He did a really good job of stalling my momentum coming to the finish.” 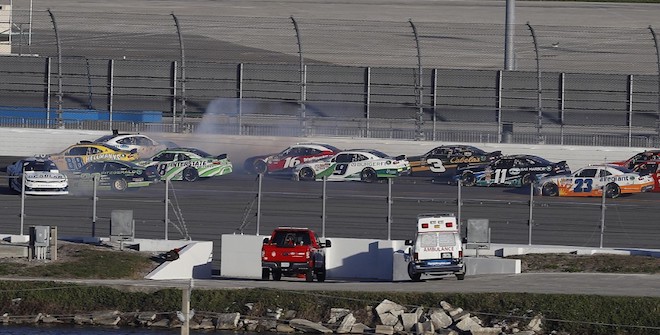 The race was littered with cautions, a record 12 to be exact. An 18-car crash produced the ninth caution and sent the race past its regulation distance of 120 laps.

Crash after crash followed on the first lap of scheduled green-white-checkered runs, extending the race overtime period to five overtimes and 23 laps, the longest such stretch in NASCAR history. There were fuel concerns for most of the lead cars.

Following Reddick and Sadler at the finish were Ryan Reed, Kaz Grala and Garrett Smithley. Xfinity Series regulars took the first seven positions, a rarity with several Cup Series regulars in the field.

Cup regular Chase Elliott, driving for JR Motorsports, was a challenger at the front, but his shot at the win ended late in the day when he had to pit to replace the right-side window on his Chevrolet. The incident injected a bit of humor into a long race as the pit crew waited while a team member ran to the garage area to pick up a replacement window and return at sprinter speed to the team’s pit.