Sauber team principal Frederic Vasseur describes the Alfa Romeo sponsorship deal as “a huge step” for his team even if it has led to a stressful winter.

After joining the team last summer in place of Monisha Kaltenborn, one of the first things Vasseur did was to cancel the planned Honda power unit supply contract and agree a new deal with Ferrari. That partnership was then expanded courtesy of a title sponsorship deal with Alfa Romeo that was announced in December, and Vasseur admits it has led to a bigger workload than usual for Sauber during the offseason.

“It’s not extra work on the technical side because we were already flat-out,” Vasseur told RACER. “The situation is that we changed from Honda to the Ferrari engine and the Alfa Romeo deal quite late because it was the end of July, so for sure we delayed the design a little bit, but it was on purpose. On the technical side for sure we are a little bit late and for the company and the marketing and communications team it was also tricky.

“To have a title sponsor for the team is a good move, but also a huge step and we have to reinforce every single department and recruit a lot and so on. But for sure it was an exciting time as well as a tricky one.

“It’s much better to have this problem than to have to deal with the guys in the factory having nothing to do!” 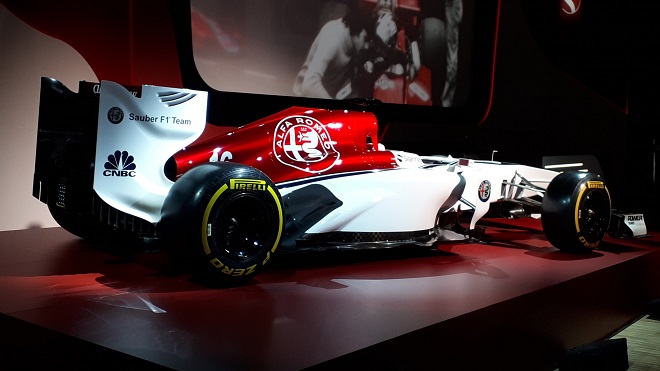 And while Vasseur is confident the change will have minimal impact on Sauber this year, he says the focus should be on the longer-term benefits of the deal.

“For sure when we decided come back to the Ferrari engine the design of the car with the Honda engine was already started. That meant a small delay when we had to redesign the back of the car to change the approach a little bit, but that’s life.

“It’s not a big deal, it’s more of a rush for the team but now we have a long-term deal and it’s not a problem if for a couple of weeks at the beginning it is an issue, we have to be focused on the next years and not on the last weeks.”