The 60-car entry list for the 2018 Le Mans 24 Hours has been published and sees a revived LMP1 class headlining with 10 entries and a 30-30 split between prototypes and GTE.

At 20 entries (down from last year’s record 25), LMP2 is the largest class, with a mix of ORECA, Ligier and Dallara chassis all powered by the spec Gibson V8 engine that is standard for the class in the FIA WEC and European Le Mans Series.

The Le Mans class-winning, Chinese-flagged Jackie Chan DC Racing return to the scene of its near overall win last year with a huge four-car entry. 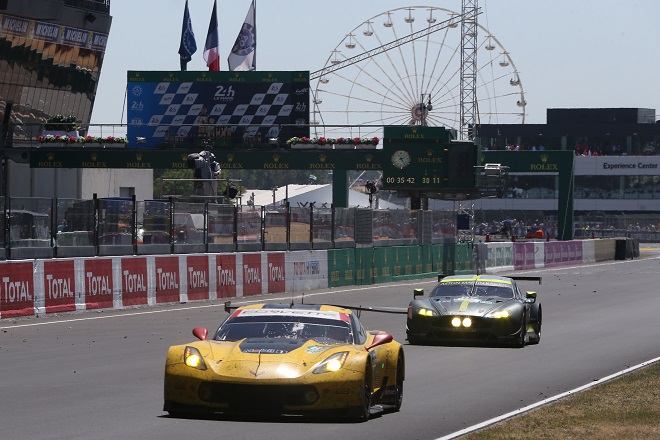 17 GTE Pro cars, equivalent to IMSA’s GTLM cars, are listed as the “Battle of the Brands” gathers.

The Corvette Racing C7.Rs are listed once again, the factory team looking to return to their previous race-winning form.

Facing up to them though will be a trio of all factory-crewed Ferrari 488 GTEs , four cars each from Ford Chip Ganassi Racing and Porsche Team.

The grid is completed by a 13-car entry of GTE Am cars with Aston Martin, Ferrari and Porsche all represented.

Keating Motorsport is entered with a Risi Competizione-run Ferrari 488 GTE that gained an auto-entry thanks to his performance in the 2017 North American Endurance Championship. IMSA Prototype entry JDC Miller MotorSports declined their auto entry and will not compete.

The 60-car grid was oversubscribed and three U.S.-based teams are listed as reserve entries: Double IMSA GTD champions and 2016 Le Mans GTE Am class winners Scuderia Corsa are fifth reserves with a Ferrari 488 GTE. Krohn Racing is the sixth reserve with its Ferrari and Brian Alder’s IMSA-entered Riley Multimatic Mk 30 Gibson LMP2 car is listed as the ninth reserve.

“The 24 Hours of Le Mans, the FIA World Endurance Championship and our continental series, the European Le Mans Series and the Asian Le Mans Series, are doing well, proof that Endurance is present in the world of motorsports,” ACO President Pierre Fillon said.

“I am very happy to see a plateau of 60 machines of such quality for the 24 Hours of Le Mans. Endurance radiates and continues to attract builders and teams from around the world, like pilots of all disciplines. All the ingredients that make up the DNA of our discipline will be gathered for this 86th edition of the 24 Hours of Le Mans, which will, I am sure, be thrilling to follow and live for all endurance fans.”