After a venture into the TCR arena on a limited basis with detuned cars in 2017, the promise of the TCR class in Pirelli World Challenge was strong. As the launch of the 2018 season nears next month at Circuit of The Americas, that promise is being fulfilled with Audi and Volkswagen efforts already announced. A new piece of the TCR puzzle was added today as two-time Indianapolis 500 winner Bryan Herta Autosport announced a new program for the Hyundai i30 N TCR car with drivers Mark Wilkins and Michael Lewis.

“Hyundai is coming out with a new performance line, the N, and they wanted to go racing to highlight their performance,” BHA President and CEO Bryan Herta said from the Chicago Auto Show where the program was announced. “We identified the Pirelli World Challenge TCR class as a good entry point for us; They reviewed the motorsport landscape and we did the same, and we both came to the conclusion that Pirelli World Challenge was going to offer the highest level of competition and the best exposure for their first year here. Everything came together very quickly from there.”

The i30 TCR car – marketed as the Elantra GT in the U.S. – has raced in Europe with some success; Gabriele Tarquini took the first win in the TCR International Series last year and will race for Hyundai in WTCR alongside Norbert Michelisz. Hyundai is launching the N brand – named after the location of Hyundai’s development facility in Namyang – in the U.S. this year, so racing the car in the U.S. made sense alongside the launch of the brand. Hyundai’s last appearance in World Challenge was a 2015 Bob Stallings Racing privateer effort with a Genesis Coupe in the GTS category. 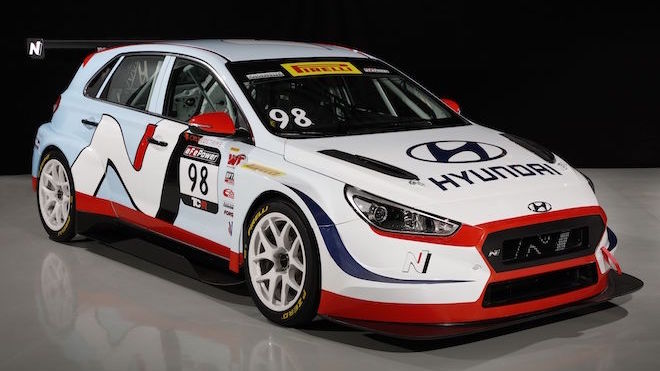 For the driver line-up, Herta went with experience, choosing two veteran World Challenge drivers. Mark Wilkins, who led Kia’s GTS effort with the several victories in the Optima from 2012-15, scored several victories, spent last season as the second driver for RealTime Racing’s SprintX efforts in the Acura NSX GT3 alongside Peter Kox. Michael Lewis raced in the GT Cup category before moving to GT with Effort Racing in 2016, where he won twice before Effort folded, and then joined Calvert Dynamics for a few races. Last year he partnered with two different K-PAX drivers for SprintX in the team’s McLarens.

“For our team, this is a different discipline than anything we’ve done before, so having the ability to go out and hire drivers like Michael Lewis and Mark Wilkins is a big plus for us,” Herta explained. “They both have fairly extensive experience in these types of vehicles and Pirelli World Challenge – they know the tracks, they know the cars, they know the tires. Mark has front-wheel-drive experience in his background as well. We wanted guys that could get us up to speed quickly and not the other way around.”

“I think that going back to front-wheel driver with the i30 N will bring on quite a bit of the knowledge that I picked up from the program a few years back,” Wilkins said. “From a standpoint of fitting into that program and what I hope to be able to bring to this program, I think those years of front-wheel drive and having the opportunity to really figure out how to make the front-wheel-drive cars work will get us kicked off in quick order.” 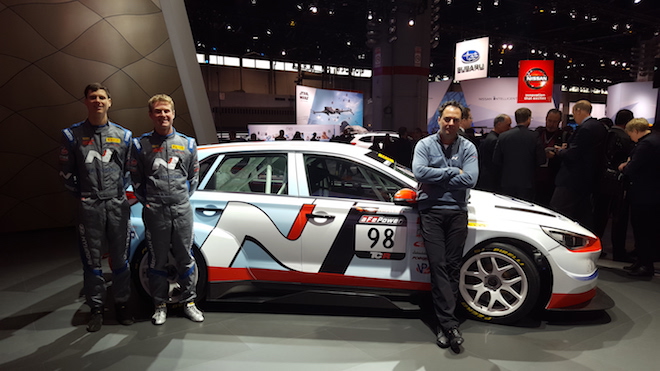 Bryan Herta Autosport began competing in Indy Lights in 2009 after Herta retired as a driver, having won in IndyCar and in sports cars – including the 12 Hours of Sebring. The team expanded into the IndyCar Series and won the 2011 Indianapolis 500 with Dan Wheldon. Partnering with Andretti Autosport for the past few years, the team won the 500 again in 2016 with Alexander Rossi. Bryan Herta Autosport also did three years in the Red Bull Global Rallycross. Most of the crew from that effort will be manning the World Challenge Hyundais, which Herta notes is the team’s first factory program. So while the car is new, the team campaigning it has several years of experience together.

Herta admits that he doesn’t quite know how past experience will translate to a TCR effort in World Challenge, but notes that the principles are the same whether it’s Indy cars, rallycross or touring cars. So he expects a reasonable level of success, as do his drivers.

“Bryan’s teams are very professional,” Lewis said. “That’s really cool, with all the things they’ve done, to be a part of that history. There are a lot of really strong teams in Pirelli World Challenge, and Bryan is another one of those. What he’s done, he’s done very well. To be on a team that has a good record, winning the Indy 500 twice, winning other races with Alexander Rossi … translating victories from that series to another one, it’s going to be hard for sure. But they’re a hard-working team with a lot of history and they’re very professional. I’m pretty stoked to be a part of it as well as Mark is, I’m sure.”

Bryan Herta Autosport received one i30 N TCR just before its unveiling at the Chicago Auto Show and is waiting on a second car in transit. The first race for TCR and the other Touring Car categories is at Circuit of The Americas March 23-25. The Pirelli World Challenge season begins with GT and GTS at the Firestone Grand Prix of St. Petersburg on March 9-11.