Michael Shank had every intention of testing at Sonoma Raceway on Monday with driver Jack Harvey alongside his Schmidt Peterson Motorsports teammates, but widespread delivery delays from chassis manufacturer Dallara left the new IndyCar entrant waiting on a tub to complete his new car.

Although Shank’s woes are far from unique – most of the field have reported significant holdups with receiving everything from new DW12s to the 2018 bodywork built by Dallara – the Ohio-based entrant finally took possession of the carbon-fiber safety cell (pictured below) Wednesday morning. 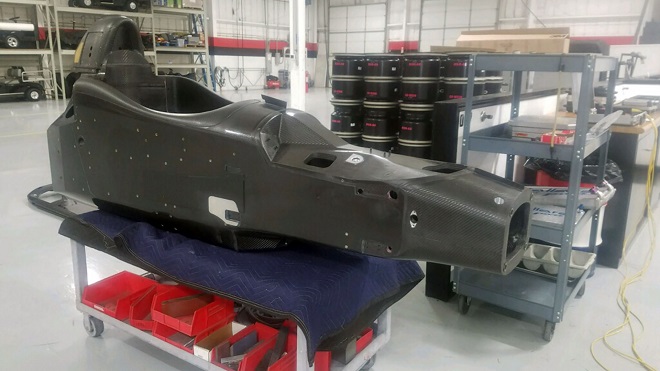 “The car you saw in the Schmidt Peterson photo shoot with all three cars wasn’t mine; the bodywork was my only contribution for that one, and we were just waiting for the tub to show up so we can build the rest of the car around it,” Shank told RACER. “It’s the central piece of the car, so you can only do so much without it, but now that we have it, we’ll be flat out to get it ready and go testing.”

With at least six races scheduled for Harvey in the No.60 Honda – the first coming March 11 at the St. Petersburg season opener – Michael Shank Racing is planning for a busy close to February to prepare for its debut.

“We obviously wanted to be in Sonoma, but now we’re planning to be out for the first time with the car at Sebring on Feb. 27-28, back at Sebring again the following week on March 6, then we go race in St. Pete, and my sports car team races the next weekend in Sebring with our Acuras,” he said. “We also have the March 27 open test at Indy on the calendar, so it’s going to be a hectic time here for my team.”

Despite missing out on testing activities in January and most of February, Shank says MSR’s technical alliance with SPM will be incredibly beneficial once the No.60 hits the track.

“Naturally, you want to be out there with your own car, your own team, but I’m fortunate to have a multi-year partnership with Sam [Schmidt] and Ric [Peterson] that will help us immensely,” he said. James Hinchcliffe and Robert Wickens have been out testing with the new car, and Jack’s been there to watch and take part from outside the car, so I expect it’s all going to help us in the end. If I was doing this by myself, we’d be way behind the 8 ball, but I know the SPM guys have us covered.”