Alessandro Pier Guidi was a busy man at the recent Roar Before the Rolex 24 [pictured], being the lone driver to set up and test the No. 62 Risi Competizione Ferrari 488 GTE. His efforts will pay off this weekend, when he is joined by co-drivers Toni Vilander, James Calado and Davide Rigon for the 56th Rolex 24 At Daytona.

“We tried some different setups at the Roar, because I was all by myself,” Pier Guidi said. “I don’t need much driving time by myself, so we tried many different things. We collected data, we analyzed everything during the break, and we put it together to get the best setup for the race. I think it worked.”

Pier Guidi was first out in Thursday’s opening practice for five laps. Between now and Saturday’s start, he plans to run only a few laps in tonight’s session and possibly tomorrow.

“I need less driving time than my teammates, because I drove the Roar all by myself,” he said. “Ultimately, we all have more or less the same request from the car, so basically we use the same setup. I tried to get the car balanced as best as I could.”

Vilander said that missing the Roar didn’t put him at a disadvantage for this weekend.

“I did two days here testing by myself in December,” Vilander said. “I’ve done this this race many times. The track is challenging, but it is not that bad – not many corners. All of us have similar driving styles, and we can attack the race with four drivers. Setup-wise, it is not a big issue. This car has been out for a long time, and the basic setup is there. Each year you make small changes. We did some of that here in December, and Alessandro kept working on it at the Roar.” 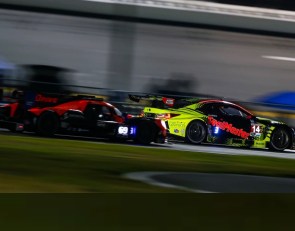