When people look back at the 2017 Formula 1 season in years to come, they’ll see a campaign that was wrapped up long before the final round, that delivered a fourth consecutive championship double for Mercedes, and that appears on paper to be so similar to what had gone before.

On many counts, that potential went unfulfilled. But it should still be seen as a landmark season for the sport that could lead to an even brighter future.

Liberty Media’s takeover and early influence will be covered at another time, but it added to an air of expectation at the start of the season. New regulations meant a chance to shake-up the competitive order, with the increased influence of aerodynamics expected to work in Red Bull’s favor.

But it was Ferrari that came out the blocks quickest. Sebastian Vettel’s win in Australia – in a close if unspectacular race against Lewis Hamilton – suggested this really could be a classic year. Three wins and three second places from the opening six rounds gave Vettel a 25-point advantage leaving Monaco, so how did that situation turn into both championships being wrapped up by Mercedes with two races still in hand?

It would be too easy to simply point to Ferrari mistakes. A crucial spell late in the season is where the title slipped away, but that only proved so decisive because of the level Mercedes was performing at.

The W08 was dubbed “a diva” by both Hamilton and team boss Toto Wolff, but boy, was it a quick diva. Over those first six races, the Mercedes was on average nearly 0.15s quicker than the Ferrari over a qualifying lap; its biggest advantage being nearly half a second in Bahrain (below). By contrast, the two times a Ferrari was on pole, its margin was less than 0.1s on both occasions. 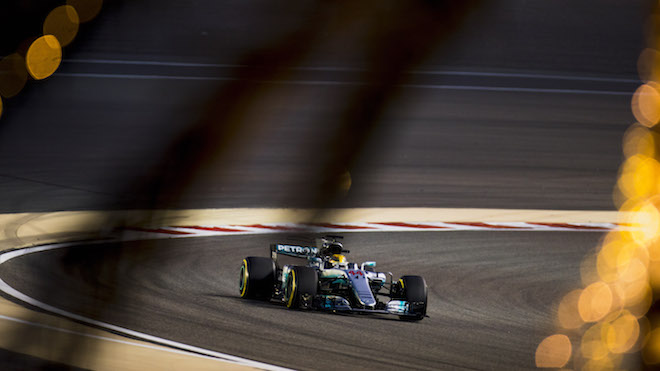 The signs were there from the start. A car of such raw performance needed taming, but a team of Mercedes’ size and resources was always likely to improve as the year went on. While performance was one thing, reliability was a whole other story. Only once – Valtteri Bottas in Spain – did Mercedes suffer a retirement.

Ferrari’s inability to match that record proved costly, but the Scuderia’s five DNFs was still a clear improvement on the eight failures a year earlier. (Mercedes, by comparison, suffered only three DNFs in 2016, of which two were a result of the collision between Hamilton and former teammate Nico Rosberg in Barcelona).

The dynamic between the drivers was another reason the Silver Arrows proved so hard to beat. Hamilton felt comfortable in the team knowing he was its focal point. While not given de facto number one status, he was aware he had the ability to pull the team around him without needing to fear any political challenge from his new teammate. Hamilton was so confident that he knew by riskily giving Bottas back a position on the final lap in Hungary – with Vettel taking maximum points and Max Verstappen so close behind the second Mercedes — he was putting money in the bank. Ultimately, he never needed to call it in.

While Mercedes grew into the battle as the season went on, the pressure was starting to build on Ferrari as the potential for a first drivers’ championship in a decade grew nearer. Vettel led by 14 points over the summer break, but two specific races really turned up the heat.

Hamilton knew how highly-strung Vettel was after their collision in Azerbaijan, where the German lost his head and drove into the side of his rival. It was a weakness Hamilton could play on if he remained consistent, so his performances in Belgium and Italy pushed Vettel to near breaking point.

Spa-Francorchamps was a masterful performance, with Vettel in the slightly quicker car but unable to find a way past the leading Mercedes. Hamilton’s racecraft was of the highest quality, with Vettel’s big chance – following a Safety Car restart late on (below) – being thwarted by Hamilton opting not to use full throttle on the run to Eau Rouge in order to cause Vettel to have to lift and lose momentum.

A dominant performance in Italy then meant Hamilton led the championship for the first time and his rival knew the importance of capitalizing on a golden opportunity in Singapore. The street circuit had long been earmarked as a Ferrari victory based on its Monaco pace, and Mercedes was only third quickest in qualifying behind the ever-improving Red Bulls.

Even after a stunning qualifying lap and safe in the knowledge he had the fastest car by some distance, Vettel was under pressure because he couldn’t afford not to win given Hamilton’s recent results. Vettel cracked.

A clean start would very likely have led to maximum points for the German, a result that single-handedly would have ensured an at-most 11-point margin between the two title contenders heading to Abu Dhabi based on the results that followed. Instead, Hamilton produced a stunning drive to take full advantage of Ferrari’s double retirement, with three consecutive victories after the summer break representing a run of form reminiscent of Vettel’s own march to his second, third and fourth Red Bull titles.

Vettel’s failure to qualify in Malaysia and then retirement a week later in Japan were the final nails in the coffin, but without Singapore those issues would not have proven terminal to his title hopes. Ferrari built a car good enough to win the championship, but it needed a near-faultless year from both the team and the driver in much the same way Fernando Alonso produced in 2012. It didn’t get it.

The knowledge that the Ferrari and Vettel combination had such potential drove Hamilton on to new heights from mid-season onward, in a display that his own boss described as being “on another level.”

“I think he made it into Formula 1 with great talent, ambition and hard work,” Wolff said after the final race. “Through the five years he has been with us he has developed as a human being every year. After the rough ride we had last year, he’s come back very strong, very rounded, very secure into the 2017 season. This is the main difference I have seen and it has made him perform in an outstanding way in the car.”

With tracks often suiting one team or the other, a wheel-to-wheel battle between Hamilton and Vettel was rare. It all came down to dealing with the pressure of taking advantage of the opportunities presented and remaining calm and composed. One driver did that better than the other this year. Mercedes gave Hamilton the environment to thrive, while Ferrari closed ranks from the opening race.

Ferrari didn’t get the best out of Vettel, but Mercedes did get it out of Hamilton. So many factors add up to a successful season, but in such a close battle, that was a key one. 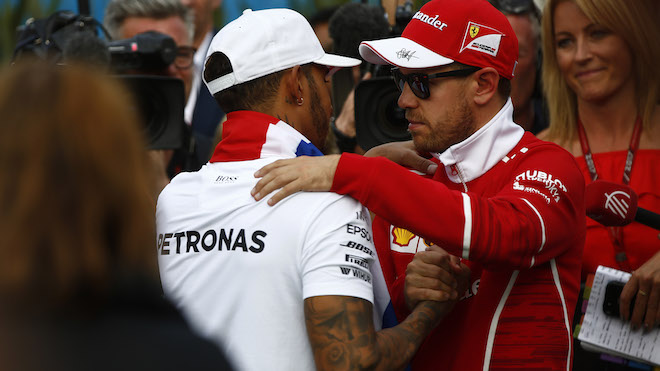