Just days after BMW Motorsport announced that long-time works driver Maxime Martin was moving on from racing with the German brand to pursue other opportunities in motorsport, Aston Martin Racing has revealed that it’s signed the 31-year-old Belgian. Martin will race with Aston Martin Racing in the 2018/19 FIA WEC ‘Super Season’ driving one of the team’s two brand-new GTE Pro-entered 2018 Aston Martin Vantage GTEs (pictured above).

“We’ve had an eye on Maxime for several years now, so we are delighted to welcome him to Aston Martin Racing. He is an exceptionally talented GT driver and he is the perfect addition to our high-caliber driver line-up,” said Aston Martin Racing team principal Paul Howarth.

Martin brings a wealth of experience and success in endurance racing to Aston Martin Racing for its ambitious 2018 program. In 2016 he won the Spa 24 Hours and over the years has finished as high as second in the grueling Nurburgring 24 Hours. Notably, in the past he also raced at Le Mans in an Aston Martin, finishing seventh overall in a Marc VDS/Kronos-entered Lola Aston Martin DBR 1-2 LMP1 back in 2011. 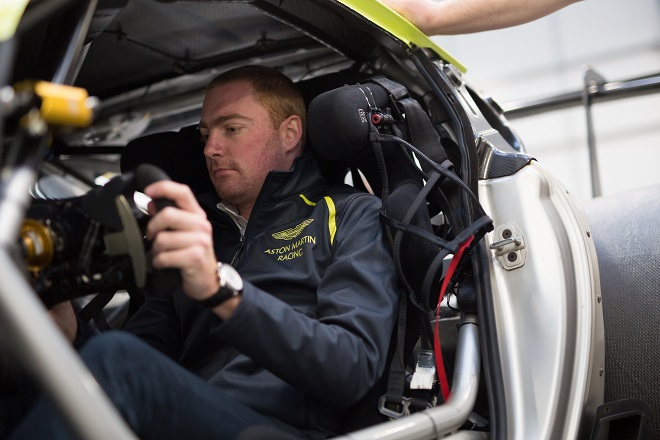 “I’m extremely excited to join Aston Martin Racing for the WEC ‘Super Season’,” said Martin (pictured above). “I have driven other Aston Martin Racing cars in the past and have been in contact with the team for the past few years, but I am quite honored to take the next step with this great manufacturer. It’s a new challenge for me and also a big change, but I feel that this is the right moment to make this move, especially with the race debut of the new Vantage GTE.

“I have competed at Le Mans three times before, but to come back again next year as an official Aston Martin Racing driver is an amazing feeling. I very much hope we can look forward to a lot of success together.”

The full Aston Martin Racing driver crew configurations for its two Pro cars are set to be revealed next year.