Formula 1 teams will supply Ross Brawn’s motorsport department with data from their 2017 cars in order to help with research into ways the sport can improve overtaking.

One of Brawn’s primary areas of focus since being hired by Liberty Media as managing director of motorsports has been to investigate how overtaking can be improved without the need for driver aids. While putting together a research team for that exact task – led by former Williams head of aerodynamics Jason Somerville – Brawn says teams will provide their computational fluid dynamics (CFD) models from this year to give the sport recent data to work with.

“We’ve bought the geometry of the old Manor 2017 car because we wanted to have a generic model that we could use in CFD modeling to at least give us a basis,” Brawn is quoted as saying by ESPN. “We know the Manor car is not a front-line F1 car but the geometry is there for the 2017 regulations and that’s all working there.

“We have a model of two cars running together and we’ve carried out all the initial work. Now the season has finished, the teams are going to start giving us their 2017 cars to have more representative models to look at. We’ve been putting in place the confidentiality agreements with the teams and they are going to start providing us with representative models to run in our CFD program.

“I’d say the team of people we are putting together is about 75% complete – there’s a couple more to join in the new year, and that’s all going very well. I’m quite excited about it and there’s things that we’ll be able to show you early next year that will demonstrate what we are trying to do.” 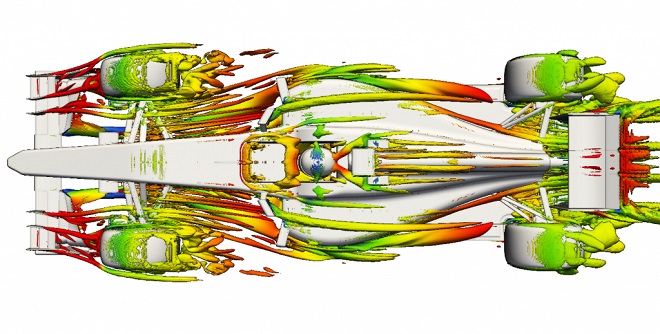 Brawn adds that while the rules currently limit the amount of CFD work that teams are allowed to do, the potential for his department is far greater and will allow it the freedom to explore a number of different ideas.

“One of the interesting things for us is that we don’t have the limitations on the CFD technology and capacity that the teams do with the regulations. They have quite strict rules about how much CFD they can do and what type of processes they can use.

“We don’t have that and it’s slightly opened our eyes in a way as to where F1 is and where the world is – and the world has overtaken F1 by a long way in terms of CFD. So the capacity we have and ability to do what we need to do is far in excess of any F1 team.”