Pippa Mann says that she has been buoyed by the response she has received since speaking out against the FIA’s appointment of Renault F1 development driver Carmen Jorda to its Women in Motorsport Commission. Jorda, whose place on the Commission was announced on Friday, has been a frequent advocate for the creation of a separate Formula 1 world championship for females on the grounds that she does not believe that they can compete on equal terms with men. When news of the Spaniard’s new role broke, Mann responded with a tweet expressing her disappointment:

Dear @fia,
If the news I am hearing is correct, and you have appointed a racer with no notable results, who does not believe we compete as equals in this sport, to represent women in racing, I am incredibly disappointed.
Sincerely -an #Indy500 qualifier, #IndyLights race winner.

Among those who responded was Leena Gade, who has three 24 Hours of Le Mans wins as a race engineer to her credit, and who currently serves on the Commission.

I’m in the commission, an ambassador 4 engineering. I’m addressing this with them b4 commenting further BUT I chose to compete in a man’s world, like so many other women in countless Motorsport roles. WE want to be the best against males & females. Can’t do that?Play another game https://t.co/P1uHC6SNlN

“Honestly, [the response] has been really surprising,” Mann told RACER. “This was obviously something that mattered too me quite deeply personally, as I fought fairly hard to take a stand on this. We saw a lot of other female racers stand up earlier this fall when Carmen made her comment that she does not believe women can be equal.

“Obviously that’s not what most of us feel in the sport, however to see someone with that opinion elected to this position to represent women in motorsport on the FIA Womens’ Commission was disappointing.

“It’s a very, very difficult situation. I think the best thing that has happened since this appointment has been how strongly many of us – and not just female racers, but women who work in the sport and many male and female fans – have also stood up and said, ‘This is not a good appointment for this position, for this reason.’

“To me, the most worrying thing is whether this is a reflection of the beliefs of the FIA towards female athletes in motorsport in general. It’s not personal with Carmen. It’s that someone who holds those beliefs should not be put in a position of power where the mission statement is the opposite of those beliefs.” 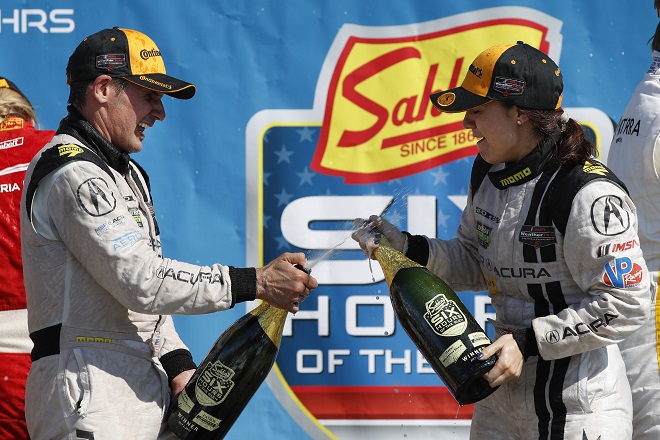 According to Mann, the timing of Jorda’s appointment is made all the more incongruous by the success that female drivers have enjoyed across the sport this year.

“When we look outside of the Formula 1 blinkers, this year Christina Nielsen claimed her second IMSA GTD drivers’ championship,” Mann said. “Katherine Legge (at right, above) and her co-driver [Andy Lally] were multiple race winners. This year I actually became the first female in Indianapolis Motor Speedway history to turn a 230mph lap. Tatiana Calderon fought for points in GP3 and became the first female racer on the podium in a World Series V8 race.

“So against this backdrop of female talent that’s actually out there achieving, that’s why it’s so disappointing to see the FIA take this step, because there are female racers out there right now who are competing.”