When it comes to making strong first impressions, Ernie Francis Jr. is on the right path with Ford Chip Ganassi Racing.

The 19-year-old Florida native stepped into the No. 67 Ford GT on Tuesday at Daytona International Speedway to turn his first laps in IMSA GT Le Mans machinery, and according to the reigning SCCA Trans-AM TA champion, full credit goes to the team owner for making it possible.

“It was a great opportunity, and it all comes down to Chip for giving me the chance to test the car,” Francis told RACER. “I’ve known Chip for the past two years, he’s been watching my Trans Am career, watched me race at Detroit, and about two weeks ago, I rang him and asked what it would take to let me test the Ford GT. He rang [CGR managing director] Mike Hull and set up a call between us to get it sorted out, and here I am now.”

Although Ganassi is often knocked for looking outside the United States for talent, his ongoing support of Jeremy Shaw’s Team USA program and willingness to give a kid like Francis the first big test of his career suggests the criticism isn’t necessarily deserved.

“I think it’s awesome for him to do this, and I was really surprised by his answer,” Francis added. “He wants to help younger drivers in the sport, and it says a lot that he’s been watching what young drivers do in series like Trans Am and Pirelli World Challenge.”

For his part, Ganassi says Francis stood out during his title-winning Trans Am campaign and saw a chance to lend another hand to a worthy recipient.

“The guy’s winning races all the time, and I like guys who win races and championships,” he added. “So it was easy to give him some laps in the car, and if it helps the kid in some way, we’re happy to do it for him like we do it for others.” 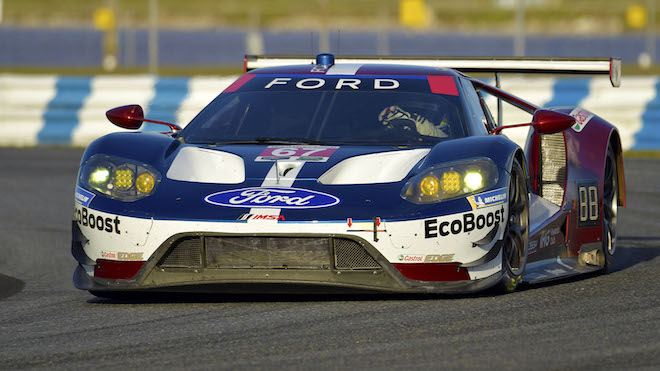 After winning 10 out of 13 Trans Am races in his big and bruising Ford Mustang, adapting to the comparatively tiny and precise Ford GT was the first order of business for Francis on Tuesday.

“My first time sitting in it was 30 minutes before I went out, and I made sure to read the 30-page handbook on the car the night before,” he said. “My first thought when I was about to drive was ‘don’t stall it in front of everybody!’ I got out on the track fine, got warmed up to the car, and it’s amazing. It does everything you want turning-wise, braking, power down. It’s one of the best cars I’ve ever driven.

“It was a big transition. The Trans Am car has a lot of power, big tires, big sidewalls, so you can really attack the curbs and throw the car around. With the Ford GT, you don’t want to be doing that, be smooth, be sharp with your inputs. I got some practice last weekend in a [2005 Audi] DTM car, which helped. After looking over some data from the other drivers, I think I’ll be even better in my next session.”

Francis turned a dozen laps or so yesterday and was scheduled for a longer stint today in the No. 67 normally occupied by Ryan Briscoe, Richard Westbrook and Scott Dixon. Coming from Trans Am racing where he’s the only one in the car, joining FCGR’s squad of endurance winners and champions has been another valuable part of the experience.

“It’s really cool to be in a big team environment,” he said. “The other drivers have been awesome and so helpful. I’m really glad that they’re open to helping me and there’s been no rookie hazing so far…”

Having announced the continuation of its existing IMSA lineup on Tuesday, there are no Ford GT seats available for Francis to fill, but who knows where things could lead in the future.

“This was just a test to get me some laps in front of the team,” he said. “They have everybody they could need for the big races, so I’m just trying to do the best I can and give Chip a reason to hopefully keep working with me and maybe think of me for a ride in this car at some stage in the future.”