The LMP3 class became a battle of attrition, with a number of problems hitting the teams during the race. For the No. 6 Jackie Chan DC Racing x Jota Sport Ligier JS P3 it was a strong and consistent performance from both Patrick Byrne and Guy Cosmo, along with incredibly quick laps from Cosmo in particular.

The No. 66 Audi Sport Customer Racing Asia by TSRT (Massimiliano Wiser/Peng Liu/Weian Chen), was quick off the line, strongly leading the GT class for his stint, however it was once again the FIST Team AAI pair that ultimately fought for the lead in the later half of the race. After looking strong all weekend it was the No. 90 Ferrari 488 GT3 (Lam Yu/Ollie Millroy/Marco Cioci) that beat the No. 91 BMW M6 GT3 (Junsan Chen/Chaz Mostert/Jesse Krohn) to claim victory in the GT category.

After bitterly cold conditions for qualifying, the race ran in warm, sunny weather at Fuji Speedway. The race got off to an exciting start with the two Jackie Chan DC Racing x JOTA Sport LMP2s and the BBT entry fighting hard for the leading positions positions. In LMP3 it was the No. 1 WIN Motorsport Ligier (Philippe Descombes/William Lok/Richard Bradley) that got the best start and was up to fourth from the fourth row of the grid into Turn 1.

There was a very close tussle off the start line between the No. 8 BBT Ligier JS P2 entry of Anthony Xu Liu, and the two Jackie Chan DC Racing x Jota ORECA 05 Nissans with the No. 8 ORECA with Stephane Richelmi behind the wheel taking the lead.

A spin on Lap 1 for the BBT Ligier after slight contact with the No. 7 ORECA of David Cheng saw Liu drop to the back of the field. While the car looked to be OK it meant there was a big battle ahead for the BBT team to recover the lost ground – a fired-up Anthony Xu Liu though set about the task immediately.

Out in front Richelmi had his head down and was setting some cracking times, opening a lead of 14 seconds after just six laps. Behind him, the sister car was being pressured by the No. 4 ARC Bratislava entry being driven by Rik Breukers.

In a very impressive performance, by the end of lap 2 the No. 66 TRST Audi R8 LMS was up to eighth place overall. Massimiliano Wiser was driving exceptionally well, holding the No. 6 Jackie Chan DC Racing x JOTA Sport Ligier JS P3 behind him. He held this position well into the first hour of the race.

Xu Liu pushed hard and worked his way back to the tail of the David Cheng car and the pair were locked in a tight battle. Liu just managed to get by and set about chasing the ARC Bratislava Ligier in second place.

Meanwhile in LMP3, after their fantastic start WIN Motorsport had been passed by the class pole-winning No. 18 KCMG Ligier (Josh Burdon/Louis Prette/Neric Wei). In the GT class the Team AAI entries were locked in a fierce battle with the Ferrari out in front and the BMW behind.

There was early trouble for the Japanese No. 99 TKS Ginetta LMP3 entry with Asian Le Mans Sprint Cup runner up Shinyo Sano behind the wheel. An 10-minute pit stop ended with the car being pulled into the garage to replace a broken electrical connector on the steering wheel. That impacted heavily on the team’s ability to be competitive for the rest of the race.

At the one hour mark terminal trouble hit the No. 1 WIN Motorsport Ligier JS P3, the car pitting only to be pushed into the garage with what would prove to be a major engine problem. Retirement was then inevitable, a disappointing end to what had been an excellent start to the race from the Hong Kong based team.

BBT pitted after their first stint with Brazilian ace Derani climbing aboard. Pole winner Derani able to set blindingly quick times almost immediately but with a 56 second gap to close down the leading No. 8 Jackie Chan DC Racing x JOTA Sport with Richelmi behind the wheel, it would require speed and consistency. In the early stages of his charge back, Derani was able to close the gap by 2 to 3 seconds a lap, setting quicker and quicker fastest laps for the race as he went.

Ahead of its first pit stop, the TRST team in the Audi R8 LMS had pulled out over a minute gap back to its GT rivals in Team AAI. The TKS Ginetta meanwhile was having more problems, returning to the garage for more work – this time the team was dealing with suspected clutch problems.

The leading No. 8 Jackie Chan DC Racing x JOTA Sport saw Harrison Newey installed to continue their battle with the hard charging Derani. After the massive double stint from Derani, he held the lead and the gap between the two had increased to 20 seconds after both cars had stopped.

Drama hit just before the halfway point of the race with the leading car in LMP3, the No. 18 KCMG Ligier JS P3 stopping on the track with a suspected broken driveshaft. The car pushed behind the barriers into retirement, a bitterly disappointing end for the KCMG team who had looked set to build on their championship lead earned with a win at Round 1 at Zhuhai.

For their next routine stops, the two leaders pitted at the same time. For BBT it was the end of an 87-lap stint for Derani, replaced by Davide Rizzo in the No. 37 Ligier and in the Jackie Chan DC Racing x JOTA Sport it was FIA WEC Rookie of the year Thomas Laurent replacing Harrison Newey. They returned to the grid with BBT leading by 23 seconds.

The battle for the class victory in LMP3 was heating up with side by side racing between two Ligier JS P3s – the No. 11 Taiwan Beer GH Motorsport with Hanss Lin and the No. 6 Jackie Chan DC Racing x JOTA Sport now with Guy Cosmo behind the wheel. After a storming drive, it was Guy that came out on top and started to pull out a gap.

Out in front the see-saw battle between the No. 8 and the No. 37 continued, this time with Laurent reeling in the BBT car that was out in front. Laurent able to close the gap, taking the lead in commanding fashion as the pair went either side of the TRST Audi.

With 45 minutes to go, the No. 11 (Hanss Lin/Shaun Thong/Ye Hong Li) received a drive-through penalty for a pit lane infringement, meaning Cosmo extended his lead in the LMP3 class, a disjointed day getting much, much worse less than half an hour later as the No. 11 ground to a halt out on the circuit, mechanical woes ending the day for another car that looked set to score a podium finish. 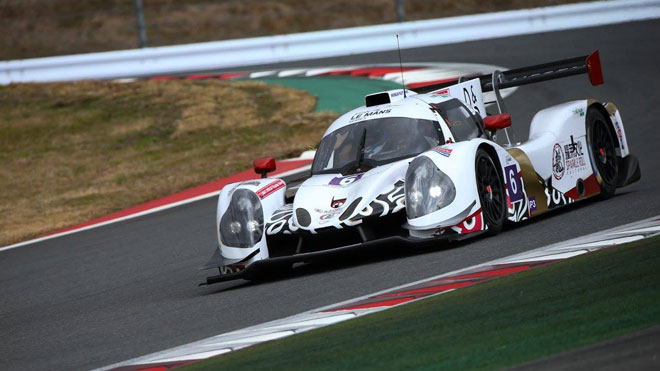 “This was a great event for us. It is a big adventure for us to come here from the United States!” declared Cosmo. “We have always wanted to race in Asia and learn new circuits, and experience new cultures so this has been great for us. But I guess we show up at a disadvantage not knowing these circuits. We unfortunately missed all of P2 during to an issue so we were really behind on track time, and learning the circuit and tuning the car, so we didn’t have the outright pace. But come race time, Patrick [Byrne] did what Patrick always does and regardless of how things had gone before, when the green flag drops, this kid goes! It is a pleasure to work with him, coach him, and see him flourish when the pressure is on!

“To get into a car that has no damage, and still in great condition, I just got in and did the best I could making sure I could manage the tires as we were double stinting. As it turned out everyone around us started having issues so the gap got larger, and then we had an exhaust issue and I was concerned for over an hour that the engine might let go, and as the sun was setting it got really hard to see! But it was great and it all fell our way.”

And in a crazy turn of events, after struggling with issues all weekend, it was the Japanese team, TKS with its No. 99 Ginetta LMP3 that claimed the final podium position at their home track 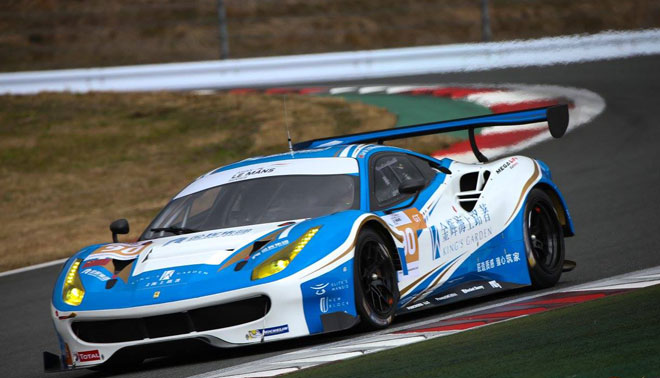 In GT it was again the Team AAI pair fighting neck and neck for first and second in class. Leading the way was the BMW M6 with Jesse Krohn behind the wheel; however this was all to change when the No. 91 received a two-second stop-and-go penalty for a violation of mandatory pit stop time. This then left the No. 90 Ferrari 488 GT3 in clear air to claim victory for Team AAI in the GT class. In third place was the No. 66 TRST Audi R8 LMS, the Audi trio putting in a spirited display for the whole race.

“It was of course our target to pass the Ligier in front of us as quick as possible, and with a good start I was able to pass him around the outside,” related Richelmi. “I didn’t see what happened behind but for sure I was able to open a gap. With fresh air it is quiet easy – especially with no traffic – so I was able to open quiet a gap. I was a bit concerned about tire degradation, but it went really well and maybe I could have pushed a bit more to build a bigger gap for my teammates.”

Behind the leading trio there were other dramas, the No. 4 ARC Bratislava and No. 33 Eurasia (Yoshi Mori/Marco Asmer/Scott Andrews) Ligier JS P2 Nissans had tussled over 4th place for much of the race, but there was disaster for the Eurasia effort in the dying minutes, the car pitting into retirement with a suspected broken crankshaft. ARC Bratislava would claim 4th.

The No. 25 Algarve Pro Racing Ligier of Dean Koutsoumidis/Ate Dirk de Jong ran steadily throughout with its two LMP2 rookie drivers, who brought the car home in eighth place overall to a win in the Bronze Cup.