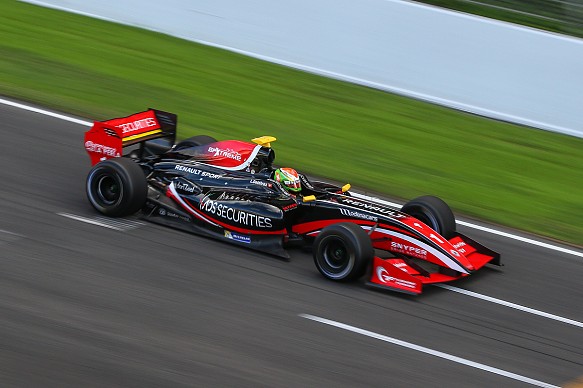 The Fortec racer jumped from fifth to pole on his last lap, thanks to an effort of 1m31.953s. Jerez victor Matevos Isaakyan was just 0.094s behind for SMP Racing, while GP3 race winner Jack Aitken, contesting his second meeting in the category, was again a pole protagonist and ended the session in third.

The only competitor who can deny Deletraz the 2016 FV8 3.5 drivers’ crown, Tom Dillmann, took seventh, but the AVF remained upbeat about his prospects.

“The last lap was always going to be the one that counted, because the track was improving,” said Dillmann, who trails the series leader by six points. “Unfortunately, my last lap was not the best. It is not the best start to the day, but it’s definitely not over.”

Lotus racer Roy Nissany took fifth, and will be joined on the third row of the grid by the second Fortec entry of Pietro Fittipaldi who, as at Monza, delivered a strong qualifying showing.

Nissany’s team-mate Rene Binder held provisional pole entering the final three minutes of the half-hour session. Amid a tumultuous series of changes to the order, the Austrian was swiftly bumped down to 10th, before recovering to an eventual sixth place.

A damp track surface as the session commenced demanded that all teams fit wet tires. In his only his second FV8 3.5 meeting, British Formula 3 race winner Thomas Randle was an early spinner, bringing out the red flags after becoming stranded in the Turn 2 gravel trap.

Teo Martin Motorsport’s Yu Kanamaru also ended his morning prematurely, after sliding off at Turn 5 on his first lap on slicks and causing a full-course yellow.

Both Randle, who held sixth at the time of his incident, and Kanamaru had their fastest laps deleted for disrupting the session.

Among those optimistic of gaining ground in the race are Arden’s pairing of Aurelien Panis and Saturday winner Egor Orudzhev, who ended the morning in ninth and tenth.