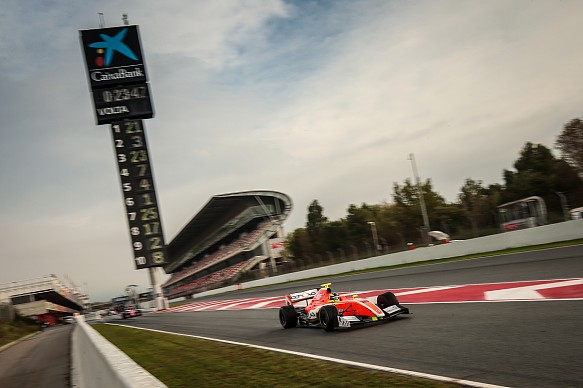 Although no rain was falling at the Circuit de Catalunya, conditions demanded all competitors began the half-hour session on wet tires.

Highlighting the lack of grip, Dillmann’s AVF teammate Alfonso Celis Jr. brought out the red flags when he found the tire wall on the exit of Turn 5 just six minutes into the session.

Conditions improved sufficiently for several drivers to opt for slicks as qualifying built to a climax.

Among them were the eventual top three of Dillmann, SMP Racing’s Matthieu Vaxiviere, and GP3 race winner Jack Aitken.

Arden’s Aurelien Panis, who is one of seven drivers disputing the drivers’ crown this weekend, moved into provisional pole with four minutes left on the clocks, before being demoted by teammate Egor Orudzhev.

Championship leader Louis Deletraz then found a 0.7s improvement to jump into P1.

The Fortec racer kept faith in his wet tires, but in the final seconds he was bumped down to an eventual fourth place starting position for this afternoon’s race by the three slick-shod men.

In starting behind his two closest rivals in the standings, Deletraz’s chance of sealing the drivers’ crown in race one on Saturday has been reduced.