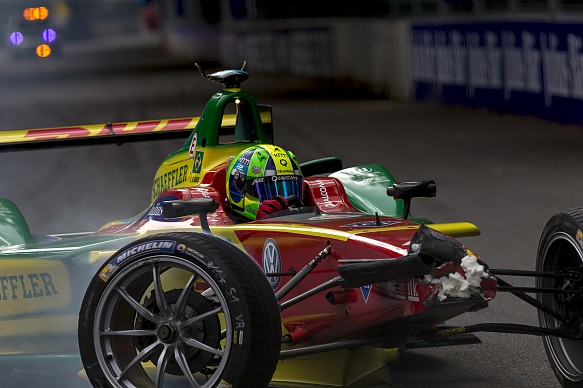 Lucas di Grassi has been penalised for crashing into the back of Sebastien Buemi at the start of their Formula E showdown in Battersea Park, London.

The stewards handed the Abt Audi Sport driver a drive-through penalty, converted into an additional 50 seconds on his race time, for causing the first-lap collision.

It makes no difference to the Brazilian’s result, as he was not classified after spending a large amount of time in the pits following the extensive damage hitting Buemi caused to his first car.

Buemi, who recovered to the pitlane and went on to clinch the FE crown by setting the fastest lap of the race, said the crash had been caused deliberately.

When asked to elaborate on the opening lap, di Grassi admitted he was “very aggressive” with his approach to Turn 3 as he battled with both Buemi and his e.dams teammate Nico Prost but reiterated his belief he was not solely to blame.

“I had a very good start, I knew I had to be aggressive against Prost if I had any chance to fight Seb for the next 33 laps,” he said. “I knew if I was behind Prost it would be a struggle.

“I was very aggressive with him, we ended up touching a little bit, Seb braked almost 50 meters too early compared to me and Nico and when I realised I locked my wheels and had an incident.

“That’s not how the first corner should have been, but with these conditions, cold tires and cold brakes, I had to be aggressive and that’s what happened.”