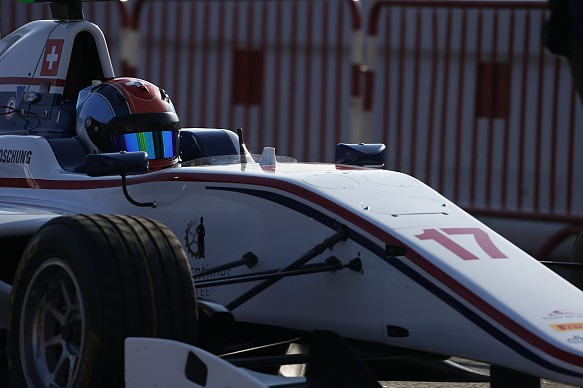 Ralph Boschung took honors in the reversed-grid GP3 Series race at the Red Bull Ring, which featured only three laps of racing in torrentially wet conditions.

Koiranen GP’s German-Swiss lined up fourth as the race began under the safety car, and immediately moved up to third when Nirei Fukuzumi – second on the grid – ground to a halt, the Japanese driver then coaxing his car back into life before returning to the pits.

When the race went green there were just 11 minutes remaining on the clock. Poleman Jake Hughes wisely took it gingerly through Turn 1, but the chasing Matt Parry exited the corner with more momentum and clipped the back of the Englishman’s DAMS car, sending Hughes into a spin.

Boschung got a run on Koiranen teammate Parry into Turn 2 and grabbed the lead, and Parry then went through the gravel with Nyck de Vries at Turn 3.

Alexander Albon, who had started seventh, was now up into second place, but the safety car appeared again to retrieve the stranded cars of Konstantin Tereshchenko and Matevos Isaakyan.

When the race went green it looked as though ART Grand Prix driver Albon may be able to make a play for the lead, but he was to be foiled once again.

Saturday winner Charles Leclerc had dropped toward the back of the field with an incident on the first lap of green-flag racing, and on the restart he was racing side by side up to Turn 2 with race-one retirement Jake Dennis when they collided.

While Dennis went into the barriers, an out-of-control Leclerc spun helplessly into the innocent Tatiana Calderon, who was minding her own business turning through Turn 2, causing yet another safety-car appearance.

The safety car returned to the pits just in time for Boschung to take the checkered flag from Albon and Trident runner Antonio Fuoco.

De Vries finished fourth ahead of Jack Aitken and Hughes, with Parry and Sandy Stuvik completing the points scorers.