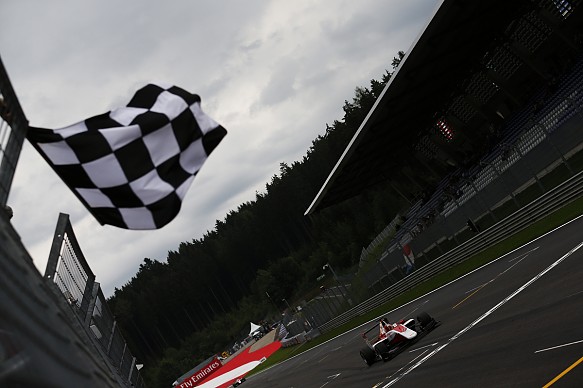 Ferrari junior Charles Leclerc made it two GP3 Saturday-race wins out of two with a superb performance at the Red Bull Ring.

Leclerc lost his pole advantage at the start and dropped as low as third, but battled back into the lead by the end of the opening lap. Alexander Albon got the jump on the sister ART Grand Prix machine of Leclerc, with Ralph Boschung swooping his Koiranen GP car around the outside into second at Turn 1. But Leclerc got Boschung on the brakes into Turn 2, and even from his tight line got a quicker exit than Albon.

The duo ran together down to Turn 3, with Albon slightly ahead, before Leclerc dived through on the inside.

Leclerc stormed to a 6.5-second lead by lap 18 of 24 when, much like the preceding GP2 race, a sudden shower of rain struck at Turn 2. Leclerc, Albon and Nyck de Vries all skated off the track at this point, but such was their advantage that they continued without losing any positions.

A cautious Leclerc let Albon slice the gap to 3.0s before he stabilised it, then took it easy on the last lap to cross the line 2.2s clear.

De Vries, who divebombed Koiranen duo Boschung and Matt Parry simultaneously into Turn 3 on the opening lap, completed an ART whitewash of the podium.

After the rain, Boschung lost his fourth place to Oscar Tunjo, only for the Jenzer Motorsport man to pick up a black-and-orange flag because his mirrors had worked loose. The Colombian pitted with a lap to go, promoting Boschung back to fourth.

Antonio Fuoco made good progress in his Trident car. The Ferrari junior got the jump on Jake Hughes as an early virtual safety car ended, and then passed Parry after the rain. Parry tried his best to get back ahead, but Fuoco clung on for fifth from the Welshman.

The fourth ART car of Nirei Fukuzumi scrapped mightily with DAMS man Hughes in the closing laps and finally claimed seventh, with Hughes moving onto reversed-grid pole thanks to Tunjo’s late pit stop.

Arden-run Renault junior Jack Aitken climbed the order from a disappointing qualifying session to take what became ninth from the Trident car of Sandy Stuvik with a few laps remaining.

The virtual safety car was caused when Jake Dennis parked on the pit straight at the end of lap three, having been hit by Santino Ferrucci at Turn 1 on the opening lap, an incident for which Ferrucci was penalized 10 seconds.