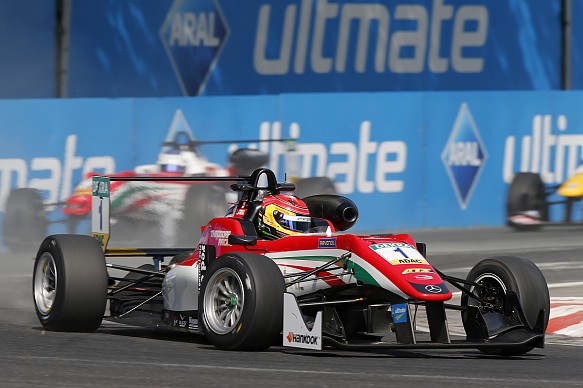 Prema Powerteam’s Lance Stroll extended his Formula 3 European Championship lead with victory in a shortened third race at the Norisring.

Stroll secured his fifth win of the season in an eventful affair, which featured a red flag following a crash between Pedro Piquet and Niko Kari.

The race started behind the safety car due to a power outage issue with the lights and it soon returned to the street circuit after a clash between George Russell and Joel Eriksson.

The field had only just got back up to full speed on the subsequent restart when Piquet launched his car over the back of Ryan Tveter’s Carlin and brought out the safety car once again, before officials took the decision to throw the red flags.

The race restarted behind the safety car on lap 13, with Stroll having to defend from race two winner Anthoine Hubert into the Turn 2 hairpin.

After holding off the advances of his rival, Stroll was able to eke out a small advantage on his way to a controlled second victory of the weekend, to increase his lead over Maximilian Gunther in the drivers’ standings to 86 points.

Hubert finished seven tenths back in second place to round out an encouraging weekend for the Van Amersfoort Racing driver, with Sergio Sette Camara completing the podium after a move on Guanyu Zhou the final restart.

Zhou held on to fourth for Motopark, ahead of Gunther and Nick Cassidy, who put in a charging drive from 19th on the grid after a gearbox issue in the second qualifying session.

Callum Ilott rose from 10th, due to an engine change grip drop, to seventh, ahead of Pau Grand Prix winner Alessio Lorandi.

Ben Barnicoat bounced back from a disappointing Saturday to finish ninth, with Ralf Aron completing the top 10 for Prema.

It was a race of high attrition, with Harrison Newey, Nikita Mazepin, Will Buller and Tveter the final classified finishers, although the American was three laps down.

A late incident saw the two Mucke Motorsport cars of David Beckmann and Mikkel Jensen collide on the exit of Turn 7, bringing out the yellow flags through the penultimate corner for the final few laps.