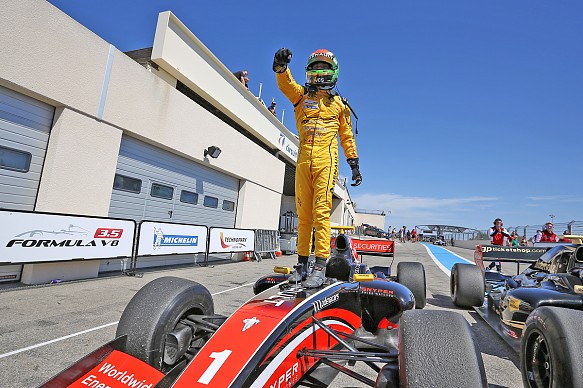 Fortec racer Louis Deletraz claimed his second victory of the Formula V8 3.5 season after a charging drive from third on the grid at Paul Ricard.

After running third in the early laps, Deletraz opted to take on fresh rear Michelins on lap eight of 23, and thereafter displayed superb pace, setting the race’s fastest lap. In contrast, Orudzhev and Nissany stopped on lap 13 and 14, respectively.

Race one runner-up Nissany exited the pitlane with a 6.9-second deficit to Deletraz, and an up-to-temperature Orudzhev hounding the Charouz-run Lotus car’s gearbox.

Nissany succeeded in keeping Arden’s Russian charge in his mirrors, but Deletraz had the luxury of managing his cushion in the closing laps to achieve a 2.9s margin of victory.

“I knew that I had the pace [to win] since Friday,” said FV8 3.5 rookie Deletraz. “I really had no choice but to pit early, as because of the aero effect around here it was always going to be tough to pass Egor on the road.

“The guys asked me if I felt I was quicker, and I replied ‘Yes,’ so we stopped.I had a fantastic pit stop, and then I concentrated on doing five or six qualifying-style laps in succession.”

Nissany confessed that he did not realize that Deletraz was leading the race when he rejoined the action from his mandatory stop.

“The race started well and I was able to make a gap to Egor,” said Nissany, who received a minor fright when locking up his rears and cutting the Mistral Straight’s chicane on lap 10. “We had decided to pit towards the end of the window. When I came out I could see that Egor was still behind, but I didn’t know Louis was in front.

“He snatched the place, but I’ll try again next time.”

Aurelien Panis produced a solid performance to take fourth behind his Arden stablemate Orudzhev. SMP-backed Orudzhev leaves the Le Castellet track as the highest-scoring driver of the weekend thanks to his victory in race one on Saturday.

Championship leader Tom Dillmann completed the top six, on a day in which his advantage in the drivers’ standings was reduced by Deletraz to 22 points.

Race one polesitter Matthieu Vaxiviere retired with five laps remaining. The French SMP Racing driver survived a spectacular off-track moment away from the grid before holding down sixth position prior to the pitstop sequence.