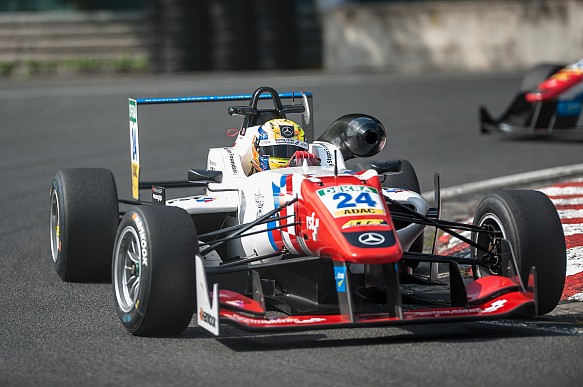 HitechGP driver Ben Barnicoat has been excluded from the final European Formula 3 Championship race at the Norisring for a technical infringement with his car’s floor.

Stewards found that the car failed to comply with article 3.14 of the F3 technical regulations. The left-front corner of the floor on Barnicoat’s Dallara-Volkswagen was deemed to be lower than the threshold allowed and he was stripped of his ninth place finish.

The British driver’s team had replaced the floor overnight following a heavy crash in the second race around the Nuremberg streets, when Barnicoat was tipped into the Turn 5 wall by Ryan Tveter.

HitechGP director Oliver Oakes was baffled by the problem, as the car – with its new floor – was cleared after being measured on the legality patch in the early hours of Sunday morning.

“It is just the front left corner of his floor, a little bit disappointing but rules are rules,” said Oakes. Given the circumstances, it is a bit of a nightmare. It was another floor we had fitted; it wasn’t the same floor [as the one involved in the race two crash].

“I don’t want to blame people in this situation, it is just a bit annoying as we did go on the patch in the early hours of the morning and it was fine. Until we get back to the workshop and analyze everything, I can’t say much more.”

Several other drivers picked up penalties after race three at the Norisring. Mucke Motorsport teammates Mikkel Jensen and David Beckmann both received three-place grid drops for race one at Zandvoort plus a penalty point apiece for colliding with each other.

Van Amersfoort Racing’s Pedro Piquet was given a written reprimand and one penalty point by the stewards for causing the incident that led to the race being red-flagged early on. Piquet ran into Tveter and was launched into the air before collecting Niko Kari.