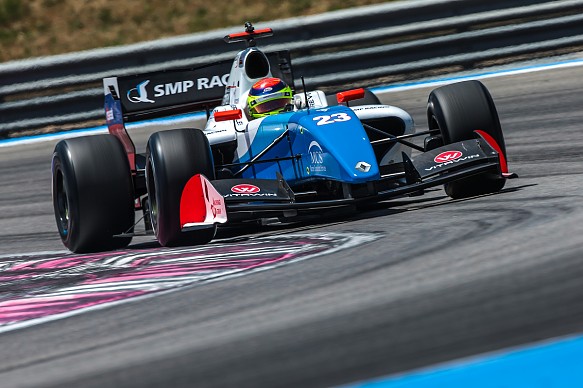 Back in single-seaters after driving a Ferrari in last week’s Le Mans 24 Hours-supporting GT3 Cup round, the Frenchman was in control for much of the half-hour session.

Vaxiviere headed the timing screens at the conclusion of the first tyre run, thanks to a time of 1m49.604s, before setting his pole lap of 1m49.087s with a minute and a half remaining.

SMP Racing boss Amato Ferrari has a large team presence at Ricard, as his AF Corse operation is also in action over the weekend in the Blancpain GT series.

The Israeli finished 0.170 seconds behind Vaxiviere, after fleetingly holding provisional pole for less than a minute as qualifying neared its climax.

Friday practice pacesetter Egor Orudzhev featured towards the top of the classification for much of the session.

The Arden driver ended the morning in third for Arden, ahead of Nissany’s Lotus team-mate Rene Binder.

AVF Formula’s Dillmann languished in 11th for much of qualifying before finding an improvement on his penultimate run and salvaging seventh.

Surprisingly, the experienced Frenchman stated that he had only raced on the short version of Ricard before, having competed in a Porsche race that missed the circuit’s first sector in 2014.

Series newcomer Artur Janosz, who competes in GP3 for Trident, took 14th on his debut for RP Motorsport.

Janosz fills the seat that has previously been occupied by Johnny Cecotto Jr this season.