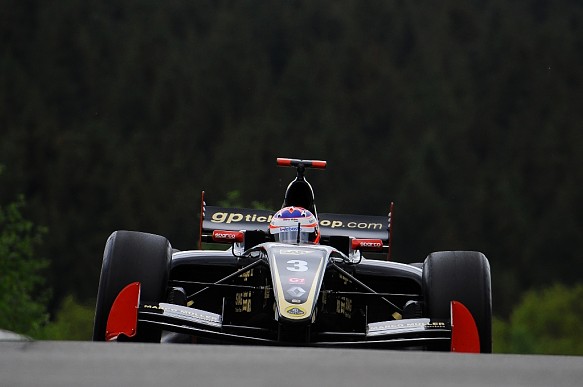 Lotus racer Rene Binder set the fastest time in Formula V8 3.5 practice at Spa-Francorchamps on Friday. The Austrian, who finished third at the Aragon season opener, ended the day over half a second clear of Teo Martin Motorsport’s rookie Yu Kanamaru, thanks to a lap of 1m58.983s recorded in the afternoon session.

“We didn’t use new tyres in the first session and ended up 12th,” said Binder. “Then in the afternoon we managed to have three stints, and in the last I used the new tires.

“I tried to do my best and we managed to cruise into the lead. I think we are really well prepared for the weekend.”

Kanamaru fitted new tires to set the quickest time in Friday morning’s session, a 1m59.991s, and declared he was feeling at ease on his first experience of Spa in an FV8 3.5 car. The second-to-fourth-placed drivers in the second session were separated by just 0.022s.

“There were no major dramas today,” said Fortec managing director Jamie Dye. “Pietro [Fittipaldi, who claimed fifth and 12th], ran low downforce, so obviously lost out in the middle sector compared to the majority of runners who were on medium downforce.

“We tried a couple of things that could suit this track, which is quite aero dependent and the results in the end have been good,” said Dillmann. “As always, we’re not the strongest on Fridays. This is becoming a trend, so we have to make the steps we usually do to fight for the pole again.

“I don’t take anything for granted; we need to work to find what we still miss. We’ll see tomorrow.”

Celis, who completed two days of Formula 1 testing for Force India at Barcelona earlier in the week, used new tires to set his fifth-fastest time.

Arden’s Egor Orudzhev ended the day in sixth ahead of last year’s championship runner-up Matthieu Vaxiviere, while Orudzhev’s teammate Aurelien Panis was uncharacteristically low down the classification, finishing in the penultimate position in both sessions.