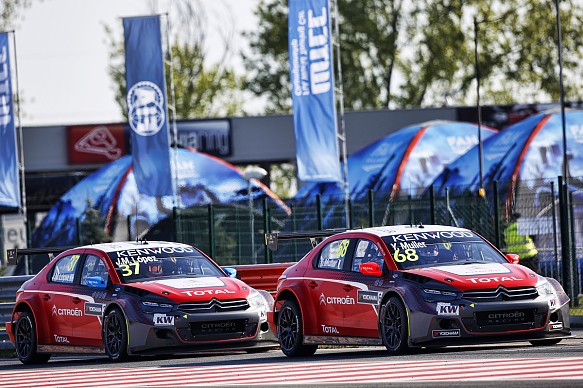 Citroen and Honda were declared joint winners of the second World Touring Car Championship MAC3 event at the Slovakia Ring, after setting identical times to a thousandth of a second.

Taking a similar pattern to the first running of the format at Paul Ricard, Citroen’s trio – bolstered by the Sebastien Loeb Racing satellite C-Elysee of Mehdi Bennani – started well off the line, with Jose Maria Lopez moving to the head of its train ahead of Yvan Muller and Bennani.

For a second weekend, though, Bennani began to drop off the back of the factory pair, and was adrift by the time they started their second lap, and eventually completed the run in a time of 4m17.233s. That gave Honda, last of the runners, a shot at winning the event and led by Norbert Michelisz it appeared to be on course to secure the win after setting fastest sectors in each of the first three splits.

The trio’s advantage dipped to 0.001 seconds through the first split of the second lap, but victory then appeared safe as they completed the penultimate sector, with Tiago Monteiro 0.139s faster than Bennani at the same point. But that lead evaporated in the final sector of the two-lap run, with Monteiro stopping the clock in exactly the same time as Citroen’s run. As a result, both teams were awarded the maximum 10 points for winning the event.

Lada’s chances, like Honda’s two weeks earlier, were effectively ended at the start when Nicky Catsburg bogged down.

Catsburg did get going, but circulating four seconds behind his team-mates, he eventually parked his Vesta up on the infield after picking up a puncture, with Lada failing to score a point as a result.