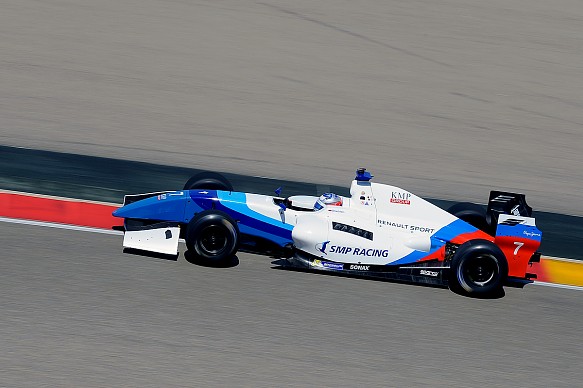 Double 2015 race winner Egor Orudzhev claimed pole position for the opening race of the rebranded Formula V8 3.5 championship at Aragon on Saturday. The Arden racer’s final effort of 1m40.328s, recorded after the checkered flag, was sufficient to move ahead of Friday pacesetter Louis Deletraz and claim his first pole in the category.

Orudzhev headed the field for the majority of the half hour session, and only Fortec’s reigning Formula Renault 2.0 NEC champion Deletraz offered a threat to the Russian.

Single-seater veteran Tom Dillmann finished in third place for AVF, and will line up on the second row of Saturday afternoon’s grid alongside Teo Martin Motorsport runner Yu Kanamaru, who improved from eighth to fourth in the closing seconds of qualifying.

Last year’s Formula Renault 3.5 runner-up Matthieu Vaxiviere, who finished a close second at Aragon last year, held a position in the top-three of the classification in the early stages of qualifying, but could only manage a lowly 10th place on his second run on new tyres.

The session was free from red flags, but Lotus driver Roy Nissany is under investigation.