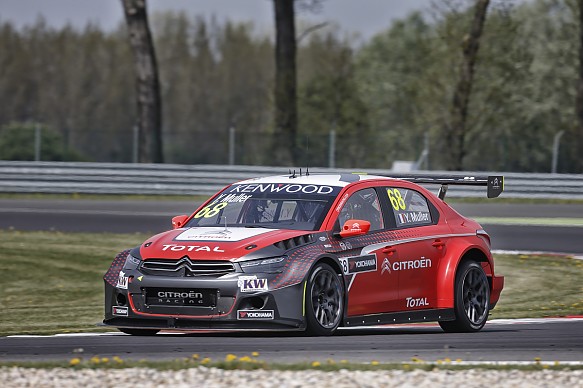 Muller, who had finished no higher than 10th in any of the three sessions preceding Saturday’s qualifying, set a best time of 2m03.910s in his C-Elysee to edge out Lada’s Nicky Catsburg by a mere 0.040 seconds.

Catsburg was second-last to run and had been up on Muller’s time through the second split, but the Frenchman’s opening and final sectors nudged him clear of the Dutchman to claim his first WTCC pole since the championship’s previous visit to the circuit in June last year.

Muller’s teammate Jose Maria Lopez was third fastest, ahead of the Hondas of Norbert Michelisz and Rob Huff. Lopez, who along with Lada’s Hugo Valente had caused a red flag in the first part of qualifying after they separately dragged gravel onto the circuit, ran after Muller but was not able to better the sister car’s time.

The top five effectively secured their places in the Q3 shootout after their first runs of the 3.7-mile circuit, with its length giving the drivers one real chance to set a time.

Lada’s Valente was the only driver to head out for a second run, but he quickly abandoned that run when Thed Bjork’s lap bumped him down to 10th in the classification, giving him the reversed-grid race pole for a second race weekend in a row.

Bjork was the first to miss out on a spot in Q3 for a second race weekend in succession, the Swede finishing just 0.059s slower than Huff who, having squeaked through to Q2, was also the last man to make the Q3 cut-off.

Tiago Monteiro was seventh in the third Honda Civic ahead of former team-mate Gabriele Tarquini, with Mehdi Bennani and Valente completing the top 10 ahead of Tom Chilton and Fredrik Ekblom.

James Thompson qualified 15th on his return to the WTCC, ahead of Tom Coronel and Ferenc Ficza.