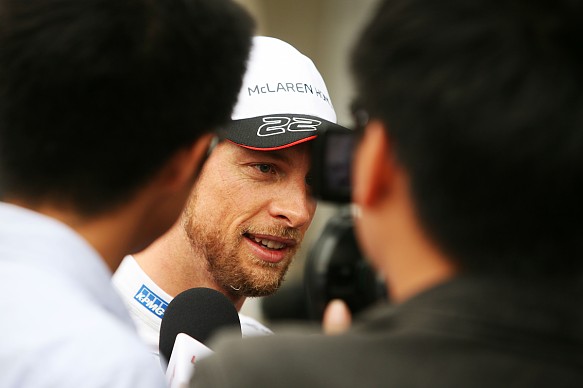 Jenson Button has expressed concern following what he felt was a “dangerous” incident involving a circuit vehicle during the Formula 1 qualifying session for the Chinese Grand Prix.

At one stage during Q1 McLaren driver Button radioed in as he noticed a vehicle parked close to the entrance of the pitlane at the Shanghai International Circuit. Over the radio Button said: “There’s a car parked at the entrance to the pits. If we go off we’re going to hit it.”

The vehicle was soon moved from its position, but Button remarked following qualifying: “For me that was the most dangerous part of the session.”

The F1 veteran has further queried why the session was not stopped to allow the vehicle to be removed, yet conversely there was a red flag for the incident at the end of Q2 when Nico Hulkenberg lost a wheel from his Force India.

“I was surprised when we had a red flag at the end of the session for the Force India,” said Button. “He had pulled off and there was an opening for the car to be pulled back into, so that was a surprise to see a red flag. It was unusual to see that.

“But then we had the car parked at the pit entry, which was directly in the way of us, and there was no red flag. It wouldn”t have been my call.”

Asked about the potential lack of consistency in the decision-making, Button replied: “It”s not a consistency issue. It’s understanding what’s important and what isn’t.”